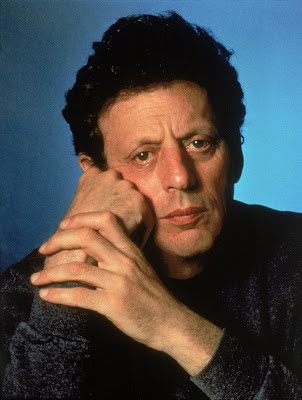 [The below is part of a transcript of an interview with Philip Glass, broadcast by the Metropolitan Opera on April 19, 2008, caught in midstream.]

....If we can start talking about it. If it could become something that could be thought about again. And that happened in a very limited way. This happened much more this time.

And once people leave the theatre, to go have a cup of coffee or a beer, what are you hoping they'll be talking about?

About our government, and what we're doing in the world. Not that we're any worse than anyone else, because I don't think we are. I think we're just about the same, which is not very good. I think our policy has been more stupid than anyone else's policy. But there's not one leader of any country I have any respect for. And we've reached this amazing place where we can have operas and radio programs and all the stuff that we have, and yet we can lose it all. We can lose it all, because the most simple, basic virtues of empathy and compassion are not part of our lives anymore.

--or use the milieu in which they're working --

-- on works that came in the past -- your work from 30 years ago. But is it hard to sort of hand over your creation?

This is very interesting. How much have the musicians actually turned to you for any advice?

They've been requesting it; I've not answered them.

They must be very frustrated that you're not answering them.

No, no. They're liberated.

I've said, "No, this is your piece now." Why should I bring my old ideas to a new generation? And I've said this to everyone, "This opera belongs to you now. You're the interpreters." I believe that absolutely.

Do you remember the first performance?

It was scary. I remember turning to Bob Israel and then I said, "Well, what if people laugh?" But they never laughed. In fact, as soon as they walked onstage, the dignity and the eloquence of the images were very, very powerful.

Now, I understand you wrote this opera pretty much straight through; you've said you wrote it with almost no re-writes.

I just wrote it as if I were writing a letter.

And yet it's not chronological. Did you start from the beginning?

I knew that already. I wasn't interested in the story of Gandhi's life. I was interested in the quality of Gandhi, and the ideas of his life. I thought of it this way: if you looked at a book of photographs of, let's say, your family. And they might not be in chronological order. But you know who your Aunt Lucy is, and you know who your Cousin Phil is, and you know who your children might be, and the actually chronology of the photographs is not important. What's important is the sum of them together becoming a family. In the same way, I thought the sum of the events that are portrayed become what I wanted to express of Gandhi's ideas. And by doing it chronologically, I thought it would be misleading. I wasn't really telling the story of his life; I was telling the history of an idea. Ideas are not chronological. They happen when they happen. They happen in a poetic and creative way, not necessarily chronologically.

Is there any moment in Satyagraha that means the most to you?

The ending is the one that most people remember. Where Gandhi is alone, and he sings. The words are from the Bagavad Gita, and Krishna -- Lord Krishna -- says, "I have lived many births -- many lives -- and so have you. I remember them all, but you do not. But my creative energy -- I consort with nature and come in time to live as a man among men. And where wickedness prevails, I set virtue on its seat again."

Philip Glass, thanks for being with us, and thank you for writing Satyagraha.