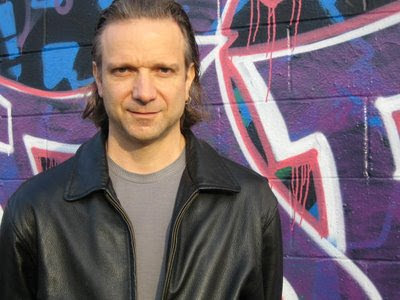 Michael Gandolfi. Y2K Compliant. Boston Modern Orchestra Project, conducted by Gil Rose. BMOP/sound. "Gandolfi's music has some of the rigor of the mid-20th-century atonalists, but it also draws on the richness of melody and timbre prized by the neo-Romantics. You would not put his work firmly in either category, and that's probably for the best, since much of its appeal is in the ease with which it moves between those poles. One moment you're taken with its braininess, its structural logic and textural intricacy; the next you're struck by the flow of fresh ideas, vivid orchestration and rhythmic vitality, all of which give it a visceral punch. The three scores included here -- all played with warmth and precision, and beautifully recorded on the Boston Modern Orchestra Project's own label -- offer a good overview of Mr. Gandolfi's sensibility. Point of Departure (1988), an essay on the beauty of angularity, transforms themes couched in the clichés of academic serialism -- jumpy, zigzagging lines -- into likable characters within a bracing and sometimes dark-hued musical drama. Mr. Gandolfi has a great ear for effect: the glissandos and arching violin lines in the third movement of Point of Departure are hard to resist, and they turn up again at the start of Themes From a Summer Night (2001), a light-spirited 10-movement suite drawn from an incidental score Mr. Gandolfi wrote for a production of Shakespeare's Midsummer Night's Dream. A few movements are from earlier scores -- he was on a tight deadline -- but they work: the comic tone painting of Bottom Brays, from Pinocchio's Adventures in Funland (1999), suits Shakespeare's story just as well. Y2K Compliant (2000), the ephemeral title referring to fears that digital gadgets might stop working at the turn of the century, uses a bustling Neo-Classicism (tinged, as always, with sharp-edged modernism) to offer a tongue-in-cheek view of our mechanistic age" [Allan Kozinn, The New York Times, 6/8/08].

Philip Glass. Songs and Poems. Tissues from "Naqoyqatsi." Wendy Sutter, cellist; David Cossin, percussionist; Philip Glass, pianist. Orange Mountain Music. 'Glass has written relatively little for solo instruments, perhaps because rhythm and texture are often crucial to the way his works unfold. But his recent Book of Longing (2006), a setting of Leonard Cohen poetry, included striking solo interludes, and one of the most ear-catching was a cello piece, performed in concert and on Mr. Glass's recording by Wendy Sutter, the cellist in the composer's ensemble. Mr. Glass went on to write Songs and Poems (2007), a set of seven movements for unaccompanied cello (outpacing Bach by one in his six suites) for Ms. Sutter. The work is already freighted with lore: Mr. Glass and Mr. Sutter fell in love during its composition, affording future music students a 21st-century Robert and Clara Schumann story, except that Mr. Glass is not barking mad. Oddly, given that undercurrent, Ms. Sutter is quoted in the notes describing the work as 'massively tragic.' Mr. Glass has never been a Schumannesque Romantic; even the most heartfelt, dramatically pointed scenes in his operas are the work of a careful rationalist. And at first the principal difference between this and earlier Glass works is that his repeated phrases are so intricately chromatic that repetition seems a necessity rather than a technique; you need to hear the music again to mine all its implications. But the shift toward the dramatic begins by the third movement, and you finally see what Ms. Sutter means when you reach the work's centerpiece, Song V, with its intensely arching melodies, implied dialogues and passionate double-stopped passages. Ms. Sutter's rich-hued, supple playing conveys that passion and drama vividly, and she is equally compelling in a varied selection of movements from Mr. Glass's Naqoyqatsi film score (2002)" [Allan Kozinn, The New York Times, 6/1/08].

20th-Century Duos for Violin and Cello. Gil Morgenstern, violinist; Darrett Adkins, cellist. Engine Company Records. "20th Century Duos for Violin and Cello . . . [features] works by Zoltan Kodaly, Roger Sessions and Maurice Ravel and performed by two brilliant and musically curious artists, the violinist Gil Morgenstern and the cellist Darrett Adkins. . . . [T]he music is terrific and the performances compelling on this surprisingly exciting and excellently engineered recording. . . . Kodaly's 1915 Sonata for Solo Cello, an audacious, moody and demanding work, is starting to become a staple of the cello repertory. This new recording should bring overdue attention to Kodaly's 1914 Duo for Violin and Cello, a formidable 25-minute piece in three movements. The duo contains alluring passages in which earthy folkloric melodies hover atop restless accompaniment riffs. But these sections are deftly folded into an organic composition with extended stretches of starkly modern, harmonically astringent and elusive music, much like Bartok's. Kodaly explores the virtuosic possibilities of the instruments, but always to greater musical ends. The Kodaly effectively sets up Sessions's 1978 Duo, a concentrated 10-minute work of extreme contrasts, shifting meters and rigorous manipulation of motifs. In this company, despite dreamy Impressionistic episodes, Ravel's inventive 20-minute Sonata, completed in 1922, comes across as a fully contemporary work, alive with angular counterpoint and insistent rhythmic drive. [Anthony Tommasini, The New York Times, 6/1/08].
Posted by Mark Alburger at 5:00 PM