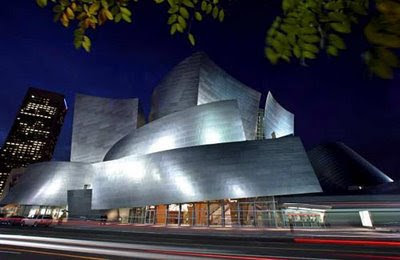 In the five years that the [Los Angeles] Philharmonic has been playing in Walt Disney Concert Hall, it has become a better and bolder orchestra. The building itself, according to the Convention and Visitors Bureau, has replaced the Hollywood sign as the symbol of Los Angeles.

No festivals occurred last month in Disney, just business as usual. But business as usual meant one astonishing concert by the Philharmonic, or under its auspices, after another. Salonen's programs moved from large late-Romantic works by Brahms, Wagner and Mahler through the 20th century of Hindemith, Stravinsky, Debussy, Dutilleux and Bartók to today, with his own concerto. (A new cello concerto by the British composer Oliver Knussen would have been included but was not finished.) The performances had the rich glow of golden-age music-making.

The Philharmonic commissioned a new work from Canadian composer Derek Charke for the Kronos Quartet and the startlingly sensual Inuit singer Tanya Tagaq. The orchestra updated its Baroque series with Couperin heard through the ears of the stellar young British composer Thomas Adès, and it also commissioned a major new work for the Green Umbrella series from Adès and a video artist, Tal Rosner.

The final recital in the organ series was turned over to the father of all Minimalists, Terry Riley, who bathed the organ, which he named Hurricane Mama, in psychedelic lights and communed with the cosmos, reaching a climax that may still have some molecules wiggling in the far corners of the hall. But the mystical way had been paved a few days earlier by pianist Peter Serkin, who, as a late replacement for the ailing Pierre-Laurent Aimard, began the process of bending space and time with two intense pieces by Messiaen, every note played as if it were a funnel to God.

In Frank Gehry's architectural embrace of the future and in his reverence for traditional, illuminating acoustics, Disney made all this not only possible but also popular. Throughout May, the hall was full. Some people were turned away. The Philharmonic's daring did trouble several organ subscribers, who were quick with their e-mails; maybe Riley better belonged among the new music events. On the other hand, I heard from anti-Minimalist audience members who unwittingly found their socks knocked off. And there were at least a few spectators who subscribed to the organ series simply to get good seats for Riley and then discovered the pleasures of Bach and Messiaen.

This is the real secret of the Disney and the Philharmonic magic. In some ways, the building may be the most modest, least innovative of all major modern concert venues. Its main job, once you're seduced inside, is to create a direct link between sound and its reception. The orchestra can hear itself. The audience has an immediate tactile connection with music that can be found only in the finest 19th century halls. The modernity of the setting, though, reminds us of the here and now, which makes new music feel right.

And it is the depth of the Philharmonic's sense of tradition that has made it the most relevant orchestra in America, and probably anywhere. . . .

Surely I don't need to tell you about Gustavo Dudamel, who will succeed Salonen next year after the conductor finishes his final, and 17th, season as music director.

The Philharmonic worthily expands, changes, evolves, its work never finished. But while the Music Center is aglow over Disney Hall, it shows no pleasure writing checks. Anything the center can do on the cheap, it does. Disney is not well cared for. Wood on the curved walls of the BP Hall, where the packed pre-concert talks are given, is warping. Walking around the exterior Sunday, I noticed pigeons nesting in the crevices. The steel looked as though it hadn't been cleaned in places for a long time. The garden, originally -- dare I say it? -- a symphony of color, with exciting, exotic blooms each season, is now bland. . . .

Right now, Disney is harshly lighted in a way that Gehry hates, and so do I. During daylight saving time, I find myself tempted to hike up the hill from The Times to concerts simply to enjoy the sight of the hall reflecting the sunset. In the winter, I prefer to drive because the lighting is so annoying.

The Music Center has gotten an enormous payback from Disney and now is coasting on the hall's fame. With the fifth anniversary coming up in September, this is the time for the center to listen to Uncle Walt and stop slouching toward utopia. Stand up straight, treat the baby right, sign the bloody checks. Disney's capacity to provide endless pleasure is well proven. But a living, breathing city needs a living, breathing symbol.