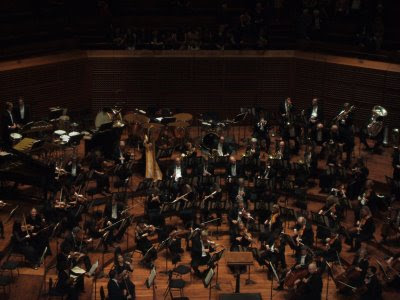 The Democratic and Republican National Conventions both provided "bounce" for their respective nominees Barack Obama and John McCain. Similarly, the opening gala of the 2008-2009 season, on September 3 at Davies Hall, proved likewise for candidates Michael Tilson Thomas and the San Francisco Symphony, in a bouncy program that featured music by Leonard Bernstein, Sergei Rachmaninoff, and Leo Delibes.

The compositional front runner was unquestionably Bernstein's popular Symphonic Dances from "West Side Story", a perennial favorite that reminds us of just how important this composer and this work are and were to the American scene. Even a quick google can make a telling comparison, in terms of number of internet citations as of today (September 9):

Certainly Bernstein's West Side Story would trounce Copland's Appalachian Spring (possibly the most-referenced American work in criticism, programming, and textbooks) in any musical Electoral College. And what Thomas and the Symphony reminded us was that WSS is appropriate not only for gala and pops concerts, but for any place and time, as a composition of beauty, depth, and energy. If the composer received assistance in its orchestration (by top orchestrators Sid Ramin and Irwin Kostal), surely this points simply to Broadway deadlines, as, ironically, the work sounds as quintessentially Bernsteinian as anything Lenny ever wrote.

Styled as a series of nine attacca numbers, the Symphonic Dances feature much, yet not all, of the most arresting sections of the musical, as the entire evening's entertainment clearly has engaging music to burn (such memorable pieces as America, Maria, and Officer Krupke never make it out of the caucuses, for instance). What survives -- Prologue, Somewhere, Scherzo, Mambo, Cha-Cha, Meeting Scene, Cool Fugue, Rumble, and Finale -- makes for festive suite that proved the high point of the proceedings.

Also a contender was the Piano Concerto No. 3 of Rachmaninoff, with Yefim Bronfman on the docket. While not as immediately engaging as this fine conservative composer's second essay in the genre, the work certainly has its advocates, such as both the conductor and the soloist, who both blazed their way through blizzards of notes on this balmy night. If the work meanders a bit, there is much pleasure in the wanderings, and the finale evokes a romp along with the best of them.

Unlike the political rallies, however, the opener failed to provide us with any contemporary notions of diversity beyond the expected male European-American dominance. And, while the performers were certainly lively, the composers were, as is so often the case, all dead -- casting programming Music Director Thomas in an aesthetic position way to the right of a musical Sarah Palin.
Posted by Mark Alburger at 8:00 PM