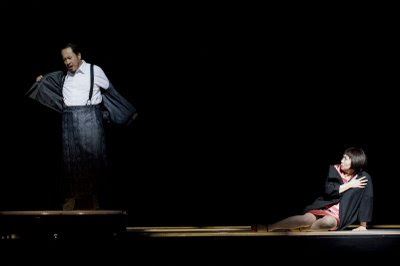 Opera is always a gamble, and the more players, the more risk.

So it is no surprise that The Bonesetter's Daughter, a new roll of the operatic die by composer Stewart Wallace and librettist Amy Tan, commissioned and presented by San Francisco Opera (September 13 through October 3 at the War Memorial) is somewhat of a crap shoot -- an uneven work of high-rolling musical-theatrical fireworks and less-than-engaging table time.

Certainly it is a committed production. From the opening cavalcade of orchestral effects, graced by sona oboes (not trumpets, as erroneously designated in the program), everything is in place to astound. Wallace's score is appealing throughout, showing plenty of Western chutzpah in evoking matters Eastern in a world where the likes of Tan Dun and Chen Yi find their natural voices) -- this is perhaps not surprising, given the composer's previous success in Harvey Milk, where he demonstrated, as here, remarkable "suction-cup ears" (a recent characterization in the New York Times of peer Howard Shore's LA Opera endeavor, The Fly).

But the story remains problematic. The opening "Fountain Court Chinese Restaurant, San Francisco, February 1997," while graced with wonderful projections (Leigh Haas) and costumes (Han Feng), veers (as does the whole show) between banality and pomposity. The seeming attempts to transform the ordinary into the archetypal and noble -- as so well achieved in, say, John Steinbeck's Of Mice and Men -- seems to elude the creators here.

The great climax of this story, where the villian Chang (who, as can be the case, has some of the greatest music and scenes here) gets his comeuppance, turns out to be a castration and descent into the pit. Hmm, we all showed up in our fancy clothes for this?

The last scene "A Hospital Room, San Francisco, 1997" (coming after the flashbacks "Immortal Heart, a small village on the outskirts of Beijing, late 1930's" and "Hong Kong Habor, 1940's") seems a tedious hit-us-over-the-head, with its protracted spelling out of reconcilliation. We got it, already.

Still, there was enough to take in and marvel that it was a pleasure to attend this, the most ballyhooed San Francisco Opera event of the season. Congrats to General Manager David Gockley, Director and Choreographer Chen Shi-Zheng, Conductor Steven Sloane, the assembled company of artists, and of course to creators Wallace and Tan. May we have more such talked-about evenings of new music drama!
Posted by Mark Alburger at 7:30 PM