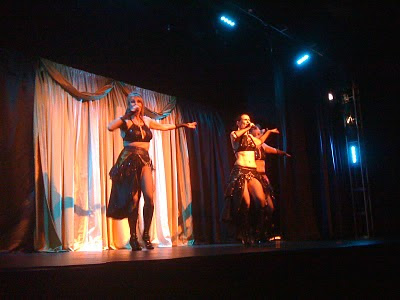 Probably not many pre-20th-century noblewomen kicked up their heels and belted and rang out pop tunes and operatic passages to rock-and-roll beats, but who knows? Maybe they should have. And such thoughts crossed the mind (when the rhythms weren't colliding too strongly) when taking in the effervescent and sexy premiere of Her Rebel Highness on November 13 at Pier 39 in San Francisco.

Operatic soprano Valentina Osinski and her popular-music cohorts Joni Maxx and Velia Amarasingham gave their all in an utterly entertaining and ear-and-eye popping display of vocal prowess and visual splendor. Billed as an interweaving of Baroque opera with pop dance forms, the latter was by far the stronger element, with relentless fore-and-back beats played to the hilt.

Assisted by the elegance of dancers Danica Sena and Norberto Martinez, and directed by Jessica Heidt, this was a show that never let up, and kept one at the edge of the seat. If the story was a bit anachronistic, simple, and unbelievable -- well, that's show biz, and in line with some of the greatest opera libretti in history.

The music, the majority of which was composed by Simon and Velia Amarasingham (with additional material by S. Heins and Osinski), provided enough excitement and variety to offset its pre-recorded accompaniment, and the guest warm-up performers of Kitty Kitty Bang Bang and enigmatic magician Heather Rogers were archly intriguing.
Posted by Mark Alburger at 9:00 PM