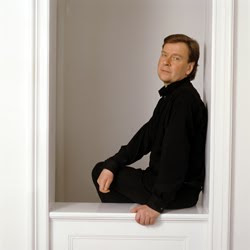 Heininen encouraged his pupils to look beyond the prevailing Finnish conservative and nationalist aesthetics, to explore the works of the European avant-garde. This led around 1980 to the founding of the informal group known as the Ears Open Society including Lindberg and his contemporaries Eero Hämeeniemi, Jouni Kaipainen, Kaija Saariaho, and Esa-Pekka Salonen, which aimed to encourage a greater awareness of traditional modernism. After graduating in 1981, he travelled widely in Europe, first to Paris for studies with Vinko Globokar and Gerard Grisey.

During this time he also attended Franco Donatoni’s classes in Siena, and made contact at Darmstadt with Ferneyhough, Helmut Lachenmann, and York Höller. He also took in Japanese drumming and punk rock in Berlin.

Lindberg's first piece performed by a professional orchestra was Sculpture II in 1982, the second part of a trilogy whose first and third sections were long unwritten.

His compositional breakthrough came with two large-scale works, Action-Situation-Signification (1982, his first piece exploring classic musique concrète) and Kraft (1985), which were inextricably linked with his founding with Salonen of the Toimii ("It Works") Ensemble. This group, in which Lindberg plays piano and percussion, has provided the composer with a laboratory for his sonic development. His works at this time combined experimentalism, complexity, and primitivism, dealing with extremes of musical material.

Kraft is Lindberg's largest work to date, with harmonies of over 70 notes and a yard-high score. It composition not only utilizes traditional instruments, but also scrap-metal percussion and a spoken text. But it also made use of a chaconne structure which was to prove a bridge for his continuing evolution. Initially, however, Lindberg found this large work difficult to follow, and with the exception of 1986's Ur, which he called "Kraft in chamber form," he entered a creative hiatus which lasted over two years. During this time he was not only rethinking his style, but also recovering from a tropical disease contracted during travels in Indonesia.

After this, his music transformed itself towards a new modernist classicism, in which harmony, rhythm, counterpoint, melody were re-interpreted afresh in a post-serial era. He returned with the orchestral/ensemble trilogy Kinetics (1988), Marea (1990) and Joy (1990). Though Lindberg became less interested in electronic manipulation of sound, he still explored the possibilities of compositional software, with music displaying complex counterpoint generated by computer. Since Joy, Lindberg has shown a gradual refining of his style, orchestrations and harmonies. This showed itself first in the work for chamber ensemble, Corrente (1992) (and its subsequent orchestral version, Corrente II from the same year), and Duo Concertante (1992). In these works, Lindberg showed influences ranging from Pierre Boulez and Tristan Murail to Igor Stravinsky and minimalism. His symphonic Aura (1994) and Arena (1995) reflect a newer, more eclectic style.

Since then, Lindberg has built upon these developments, further refining his style, which by now was leaning towards a type of new tonality hinted at in works such as Joy and Aura. This development has culminated in one of his most popular scores to date, his Clarinet Concerto (2002), where his use of a folk-like melody and rich orchestration has led to an increased interest in his work.

Recent works include Concerto for Orchestra (2003) and Sculpture (2005), Violin Concerto (2006), Seht die Sonne (2007, commissioned by the Berliner Philharmoniker under Simon Rattle and the San Francisco Symphony), and his first choral-orchestral work Grafitti, premiered in Helsinki in May 2009.

Lindberg became the new composer-in-residence at the New York Philharmonic with the 2009-2010 season, at the invitation of the incoming music director Alan Gilbert. The September 2009 opening night gala of the Philharmonic, which was Gilbert's debut as music director, featured a well-received new work, EXPO.

Lindberg’s music has been recorded on the Deutsche Grammophon, Sony, Ondine, and Finlandia labels.