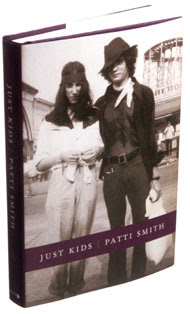 Patti Smith. Just Kids. "Patti Smith and Robert Mapplethorpe were both born in 1946, at a time when 'the iceman' and 'the last of the horse-drawn wagons could still be seen on city streets. Ms. Smith points this out at the start of her tenderly evocative memoir, Just Kids, but there is even stronger evidence that this book dates back a long time. Just Kids captures a moment when Ms. Smith and Mapplethorpe were young, inseparable, perfectly bohemian and completely unknown, to the point in which a touristy couple in Washington Square Park spied them in the early autumn of 1967 and argued about whether they were worth a snapshot. The woman thought they looked like artists. The man disagreed, saying dismissively, 'They’re just kids.' How hard is it for Ms. Smith to turn back the clock to this innocent time? Hard. Exactly as hard as it was for Bob Dylan to describe himself as a wide-eyed young newcomer to Greenwich Village in Chronicles, Volume I, a memoir that Just Kids deliberately resembles. In describing the day that Mapplethorpe created his exquisitely androgynous image of her in white shirt, black pants and black jacket for the cover of her Horses album, she describes deliberately giving the jacket a rakish 'Frank Sinatra style' fling over her shoulder. 'I was full of references,' she says, invoking them explicitly throughout the book. A Patti Smith calendar would include Joan of Arc’s birthday, the day of the Guernica bombing and the day she, as a young bookstore clerk, sat among Janis Joplin, Jimi Hendrix, and Grace Slick in a bar feeling 'an inexplicable sense of kinship with these people.' Of all the artists who shaped Ms. Smith’s persona, Mr. Dylan is arguably the one she worshiped most. She describes the 19th-century poet Arthur Rimbaud, another of her heroes, as looking like the 20th-century Mr. Dylan, rather than seeing things the other way around. So it makes perfect sense for her to use a memoirist’s sleight of hand, as Mr. Dylan did, to recapture an eager, fervent and wondrously malleable young spirit. It also makes sense for her to cast off all verbal affectation and write in a strong, true voice unencumbered by the polarizing mannerisms of her poetry. This Patti Smith, like the one in Steven Sebring’s haunting 2008 documentary Patti Smith: Dream of Life, is a newly mesmerizing figure, not quite the one her die-hard fans used to know. In Just Kids Ms. Smith writes of becoming pregnant at 19 ('I was humbled by nature') in New Jersey, giving up her baby and heading to New York for a fresh start. Describing herself as 'I, the country mouse,' she writes of heading to Brooklyn to visit friends and discovering that those friends had moved away. In a back bedroom of their former apartment she encountered Mapplethorpe for the first time: 'a sleeping youth cloaked in light,' a beautiful young man who resembled a hippie shepherd at a time when Ms. Smith had been contemptuously described as looking like 'Dracula’s daughter.' Thus fate introduced Ms. Smith and Mapplethorpe, who would become roommates, soul mates, friends, lovers and muses. Strictly speaking they were never starving artists in a garret, but the romanticism and mythmaking of Just Kids, and their tenancy in the tiniest room at the Chelsea Hotel, brings them pretty close to that ideal. They went to museums able to afford only one ticket (The one who saw the exhibition would describe it to the one who waited outside). They went to Coney Island, able to afford only one hot dog (Ms. Smith got the sauerkraut). They loved the same totems and ornaments and flourishes; they valued the same things, though in different ways. 'We were both praying for Robert’s soul,' Ms. Smith writes of Mapplethorpe’s frank ambition -- especially when he fell under the influence of Warhol, someone she deeply mistrusted — 'he to sell it and I to save it.' She goes on to suggest caustically that it was his prayers that were answered. But much of Just Kids unfolds before Mapplethorpe did the taboo-busting, shock-laden photographic work for which he is best remembered ('I admired him for it, but I could not comprehend the brutality,' Ms. Smith writes of his sadomasochistic imagery). And it occurs before his illness (He died of AIDS in 1989). Of the two of them it was Ms. Smith who made her mark first. Like Chronicles, Just Kids carries its author to the verge of fame but stops right there on the brink, so that its innocence is never compromised by circumstances too surreal or hagiographic for the reader. This book achieves its aura of the sacrosanct by insisting that the later, more doomy and fraught part of Ms. Smith’s life story belongs elsewhere. It’s possible to come away from Just Kids with an intact image of the title’s childlike kindred spirits who listened to Tim Hardin’s delicate love songs, wondered if they could afford the extra 10 cents for chocolate milk and treasured each geode, tambourine or silver skull they shared, never wanting what they couldn’t have or unduly caring what the future might bring. If it sometimes sounds like a fairy tale, it also conveys a heartbreakingly clear idea of why Ms. Smith is entitled to tell one. So she enshrines her early days with Mapplethorpe this way: 'We gathered our colored pencils and sheets of paper and drew like wild, feral children into the night, until, exhausted, we fell into bed.' They sound like Hansel and Gretel, living in a state of shared delight, blissfully unaware of what awaited on the path ahead" [Janet Maslin, The New York Times, 1/17/10].
Posted by Mark Alburger at 6:00 PM