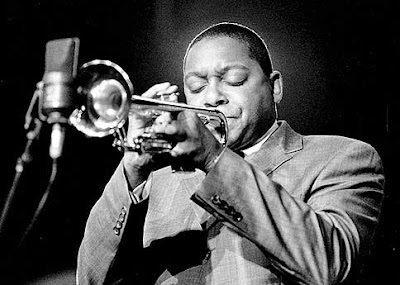 At an early age Marsalis demonstrated an aptitude and interest for music. Al Hirt gave a six-year-old Marsalis his first trumpe, and age eight he performed traditional New Orleans music in the Fairview Baptist Church band led by banjoist, Danny Barker. By 14, he was invited to perform with the New Orleans Philharmonic. During his high school years attending Benjamin Franklin High School, Marsalis was a member of the New Orleans Symphony Brass Quintet, New Orleans Community Concert Band, under the direction of Peter Dombourian, New Orleans Youth Orchestra, New Orleans Symphony, and on weekends performed in a jazz band as well as a local funk band, the Creators.

He moved to New York City to attend the Juilliard School of Music in 1978. Two years later in 1980, he joined the Jazz Messengers to study under drummer and bandleader, Art Blakey, during which time Marsalis gleaned from Blakey how to lead a band and how to how perform with intensity and consistency. In 1981, Marsalis toured with the Herbie Hancock quartet throughout the USA and Japan, as well as performing at the Newport Jazz Festival with Herbie. During his career Marsalis has played with artists including Sarah Vaughan, Dizzy Gillespie, Harry Edison, Clark Terry, and Sonny Rollins.

Not all, however, were willing collaborators. Miles Davis hedged his praise of Marsalis by strongly suggesting that he was unoriginal and too competitive, saying "Wynton thinks playing music is about blowing people up on stage." In 1986, in Vancouver, an uninvited Marsalis tried to join an angered Davis on stage. Davis said "Wynton can't play the kind of shit we were playing", and twice told the rival trumpeter to leave the stage saying "Get the fuck off."

Marsalis assembled his own band and performed over 120 concerts every year for ten consecutive seasons. Through an extensive series of performances, lectures, and music workshops, he helped generate interest in an art form that had lost much of its artistic substance. As Marsalis focused attention on older jazz musicians, many record companies had re-issued out-of-print recordings from their catalogues. Many students of Marsalis's workshops, and collaborators have included James Carter; Christian McBride; Roy Hargrove; Harry Connick, Jr.; Nicholas Payton; Eric Reed; and Eric Lewis.

He has been commissioned to compose for Dance companies including Garth Fagan Dance, Peter Martins at the New York City Ballet, Twyla Tharp for the American Ballet Theatre, and also for the Alvin Ailey American Dance Theatre.

Marsalis provided the score for the 1990 film Tune in Tomorrow, in which he also makes a cameo appearance as a New Orleans trumpeter with his band.

He collaborated with The Chamber Music Society of Lincoln Center in 1995 to compose the string quartet, At The Octoroon Balls, Marsalis's first string quartet, performed by the Orion Quartet.

In 1997, his epic oratorio on slavery, Blood on the Fields, was awarded the Pulitzer Prize in music.

Nevertheless, that year also brought out the publication of Blue: The Murder of Jazz, in which Eric Nisenson argued that Marsalis's focus on a narrow portion of jazz's past was stifling the music's growth and preventing any further innovation.

A second commision by Lincoln Center in 1998 allowed Marsalis to produce a creative response to Igor Stravinsky's Histoire du Soldat with a companion piece, A Fiddler's Tale, which premiered on April 23 of that year at Hill Auditorium, Ann Arbor, Michigan. A version without narration is paired with At the Octoroon Balls on a release available at the composer's website.

Marsalis compositions and playing is represented on a quartet of Sony Classical releases, At the Octoroon Balls: String Quartet No. 1, A Fiddler's Tale, Reel Time, and Sweet Release and Ghost Story: Two More Ballets by Wynton Marsalis. All are volumes of an eight-CD series, entitled Swinging Into The 21st, a set of albums released in 1999-2000, featuring original compositions and standard repertory, including works of Jelly Roll Morton, Igor Stravinsky, and Thelonious Monk. Reeltime is Marsalis's score for John Singleton's film Rosewood. This original music, featuring vocals by Cassandra Wilson and Shirley Caesar, was never used in the film.

Marsalis's has been criticized as a minor trumpeter who promulgates controversial and pedantic opinions on jazz. Down Beat magazine's website reports that Marsalis is viewed by many as a savior of pure jazz from "pop fusion and noise," while others have regarded his music and notions regarding jazz as "regressive."

Pierre Sprey, president of jazz record company Mapleshade Records, said in 2001 that "When Marsalis was nineteen, he was a fine jazz trumpeter ... But he was getting his tail beat off every night in Art Blakey's band. I don't think he could keep up. And finally he retreated to safe waters. He's a good classical trumpeter and thus he sees jazz as being a classical Music. He has no clue what's going on now."

Marsalis has also been criticized for his role in the Ken Burns documentary Jazz (2001), which promoted a classicist view of jazz similar to his own. The documentary focused primarily on Duke Ellington and Louis Armstrong among others, while failing to mention jazz artists that Marsalis has disparged.

The documentary also angered many with subjective statements, often from Marsalis, about the comparative complexity, popularity, and general worth of the music of a wide variety of artists.

As artistic director and co-producer of the project, Marsalis was an object of many of the criticisms of the series, which was also highly acclaimed. Critic David Adler has suggested his production role was a conflict of interest with his high onscreen profile: "Wynton's coronation in the film is not merely biased. It is not just aesthetically grating. It is unethical, given his integral role in the making of the very film that is praising him to the heavens."

Marsalis emerged as a New Orleans booster in the aftermath of Hurricane Katrina, this past August, by making public speeches and television ads to increase public awareness of the importance of rebuilding New Orleans, and also to encourage tourism of Louisiana.
Posted by Mark Alburger at 10:00 PM