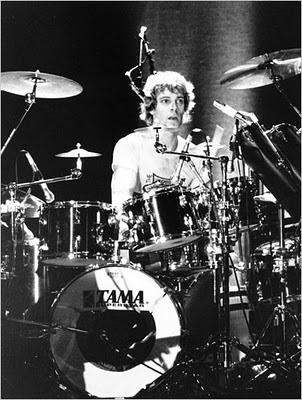 Stewart Copeland. Strange Things Happen. HarperStudio / HarperCollins Publishers. "[T]he Police have become the first band (as far as I can determine) in which every member has written an autobiography. That could theoretically make for some fascinating compare-and-contrast, he-said-he-said versions of a notoriously contentious group’s history -- if, that is, Copeland, like Sting before him, spent any time at all talking about his tenure in one of the most popular bands ever. Strange Things Happen is just slightly more generous on the Police years than was Sting’s Broken Music, which dismissed the band in a single page. Copeland devotes 10 skimpy, highly impressionistic pages to the years between 1976 and 1984, at which time the trio became the biggest band in the world. (The guitarist Andy Summers was more expansive about the glory days in his endearing One Train Later.) Almost as much attention is devoted, for no clear reason, to a single show in which he sat in with middling alt-rockers Incubus, or an incomprehensible MTV event for which he accompanied the Foo Fighters. Above and beyond the Police, Stewart Copeland has had a pretty wild life. He was raised in the Middle East, the son of a C.I.A. operative. He was something of a pioneer in the pop exploration of world music, recording with African musicians well before Paul Simon made his Graceland trek. He has worked on various documentary films and is an accomplished polo player. In Strange Things Happen, though, he glosses through these events at such high speed that at best, we get a wisecrack or a flip observation ('my daddy used to conduct his nefarious manipulation of local potentates with cocktail parties at our modest Ottoman palace'), but no real sense of what any of it means to him. His family, in particular, remains an enigma -- what are his actual thoughts about his father’s profession, beyond the exotic pedigree it bestowed on him? The book settles down in its final section, which covers the Police’s lengthy 2007-8 reunion tour. This is rich territory, since the always fraught relationships between the three musicians remained tense, and the motivation for a megatour, without even the excuse of some new music, is a bit suspect. After decades apart, they had come to appreciate the magic of their combination, but had become even more different as people. The scale and machinery of the concert industry (and the ticket prices) had grown exponentially, making the logistics of touring both better organized and far more elaborate. Copeland and Summers maintained a steady peace, as long as they stayed in their own lanes. But Sting, even more emboldened by his success as a solo act in the intervening years, is presented as an arrogant musical tyrant. The squabbling built to a moment in which the drummer finally said to the singer-bass player that only 'my high esteem for you has kept my hands from your throat, my ax from your handsome brow' (whether this is Copeland’s actual speaking voice or just his authorial voice is not clear, but you get the idea). For a reunion that was essentially a big-ticket nostalgia act, the passions of the Police still ran high -- and maybe a full book devoted to this curious era would have made for a better, and a more honest, story than Strange Things Happen" [Alan Light, The New York Times, 1/29/10].
Posted by Mark Alburger at 5:00 PM