Pit Stop Players. Thalia Theater, Symphony Space, New York, NY. "Concept counts for a lot these days, and Joshua Rosenblum, a composer, conductor and pianist, has an interesting one. Having spent much of his career conducting Broadway and Off Broadway shows, Mr. Rosenblum knew that some of the pit musicians he worked with were first-rate performers with an interest in new music. He gathered 10 of them — a string quartet, with clarinet, trumpet, horn, piano, bass and percussion — named them the Pit Stop Players and led them in a debut concert . . . . Perhaps because it was meant to be an introduction, the program was devoted mostly to excerpts rather than complete works. That had the virtue of showing the ensemble in a wide range of styles, but it also turned the program into a grab bag of incomplete thoughts. William Bolcom, for example, was represented by the third movement of his Violin Sonata No. 2, which Robin Zeh . . . played with enough flair that you wished that you could have heard the whole work. The Ariel movement of Paul Moravec’s Tempest Fantasy, for violin, clarinet, cello and piano, left a listener feeling similarly shortchanged, given the sprightliness and precision of the performance. On the other hand, two movements from Messiaen’s Quartet for the End of Time had such a light-spirited, superficial reading that a full traversal would not have been advisable. The excerpting worked better in Morton Gould’s Benny’s Gig, a set of short, jazzy character pieces written for Benny Goodman. Four of the eight vignettes were scattered through the program as interludes -- or palate cleansers, as Mr. Rosenblum put it in his amusing between-works commentary -- in spirited readings by Ed Matthew, the clarinetist, and Jeff Carney, the bassist. Mr. Rosenblum’s own chamber arrangement of the Allegretto from Shostakovich’s Symphony No. 5 also worked well as a stand-alone piece. . . . The program also included the premiere of Michael Starobin’s Dream Dream Confronting, a score in a hybrid classical and theater style in which dark, Debussian string writing is juxtaposed with assertive brass fanfares and attractively melodic pitched percussion lines. . . . The attraction of Mr. Rosenblum’s jazz-tinged Who Knows? Maybe is in the interplay between the clarinet and trumpet lines and the fluid percussion writing. But the work’s episodic qualities undoubtedly served it better in it is earlier incarnation, as a ballet score, than in this chamber version. Mr. Rosenblum closed the program with his own freewheeling arrangement of Danny Elfman’s Tales From the Crypt theme music" [Allan Kozinn, The New York Times, 2/2/10]. 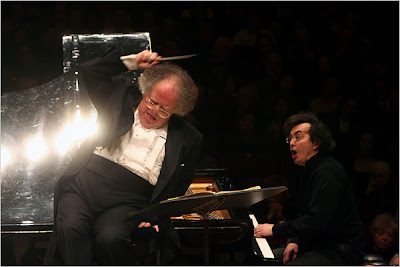 Boston Symphony Orchestra, conducted by James Levine, in Elliott Carter’s Dialogues. Carnegie Hall, New York, NY. "A not quite piano concerto from 2003, the 14-minute [Carter] piece offers a steady roil of angular, darting piano figures and orchestral retorts. Pierre-Laurent Aimard, the soloist, played with his customary flair and precision, making the most of Mr. Carter’s athletic runs and melancholy melodic strains. Robert Sheena handled the important English horn part with refinement. And the applause that greeted the work intensified appreciably when Mr. Carter, now 101, walked down the aisle to share in the ovation. The orchestra’s playing reached its zenith during a Ravel second half: small wonder, given this orchestra’s historic association with French repertory, which it has clearly taken care to maintain. Mr. Aimard returned for a brilliantly detailed, spirited rendition of the crafty, eloquent Piano Concerto for the Left Hand. . . [T]he Suite No. 2 from that Daphnis et Chloé, with splendid work from the principal flutist, Elizabeth Rowe, provided a positively rapturous conclusion" [Steve Smith, The New York Times, 2/1/10]. 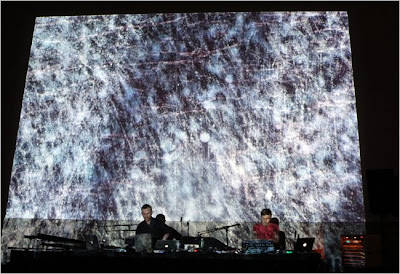 Unsound Festival. David Rubenstein Atrium, New York, NY. "The . . . Festival . . . claims a shrewdly amorphous domain: a zone in a virtual Europe (including Eastern Europe and Scandinavia) where electronics; arty, multimedia experiments; chamber-music meticulousness; punk impulses; and D.J. dance beats may all appear amid clouds of noise. Founded in Krakow, Poland, in 2003, Unsound started its first New York festival -- 11 days of events in Manhattan and Brooklyn, with a schedule (at unsound.pl/en) that includes concerts, films, panel discussions and D.J. parties -- with a free event at Lincoln Center . . . . It was a double bill of collaborations, with laptops aplenty: electronic music by Vladislav Delay (from Finland, living in Germany) with video by Lillevan (from Finland), followed by Solid State Transmitters, in which the Polish quartet Kwartludium (violin, clarinet, piano, percussion) and the German electronica musician Sebastian Meissner played highly transformed versions of songs from the catalog of the American punk and post-punk label SST. Both pairings reached for the rhapsodic and immersive, the stimulating haze. The SST songs were distantly derived from the originals, and remapped with Minimalist and post-Minimalist designs: drones, patterns, sustained swells, almost as if the presumed source material were an excuse for the kinds of sounds the group wanted to make anyway. The picked guitar line of Black Flag’s I Can See You, which had already hinted at an étude, was transferred to violin and looped into an elaborate canon. The guitar chords played at a fluctuating tempo in Blind Idiot God’s Rollercoaster were transferred to piano, turning them almost impressionistic, with Mr. Meissner’s electronics opening up echoey chasms below them, giving way to a simmering stasis of violin, clarinet and vibraphone. And the waltzing melody of The Main by Grant Hart became a high, eerie violin line over shimmering harplike sounds, then had an infusion of Latin percussion. It was convincing on its own terms, even if the SST originators might have rolled their eyes. From the European perspective, perhaps, behind the punk combativeness there was also a reverie waiting to emerge. The collaboration by Vladislav Delay and Lillevan, a shared improvisation, was simultaneously lush and bleak, enveloping the room with ominous implications. Like many electronica composers, Vladislav Delay has other aliases -- Uusitalo, Luomo, Conoco, Sistol -- including the one he used; he was born Sasu Ripatti. From his laptop came chords, mostly minor ones, wafting up like billows of fog. Within them were stop-start bass tones and ominous, interruptive sounds: gunfire, echoes, the scrape of a handheld microphone over his table full of cables and gadgets. A beat, more like a trudge than a dance, arrived and vanished at will; there were passages of little more than a low but insistent hum, or of ticking, staticky rhythm. It was a soundscape of looming cataclysm, and it paced Lillevan’s video projections (from his laptop) of rippling clouds and water, strobing vertical streaks, moving blobs like animated Rorschach blots and twinkling, pelting rain. Lillevan used monochrome, mostly gray or black on white, with pulsating red spheres — blood corpuscles? — when he showed a human silhouette. During a final crescendo, a vertical downpour filled the screen, growing denser up to a final whiteout of apocalypse or redemption. It was an exemplar of this festival’s aesthetic: high-tech, allusive and not to be pinned down" [Jon Pareles, The New York Times, 2/4/10].
Posted by Mark Alburger at 7:00 PM