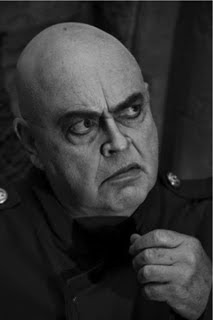 Alban Berg's Wozzeck (1922) is a huge work calling for 17 woodwinds, 13 brass, a large percussion section, 50-60 strings, onstage military and tavern music, and a small ensemble reflecting the instrumentation of Arnold Schoenberg's Chamber Symphony. So, when the Ensemble Parallele announced its intentions to present the West Coast premiere of John Rhea's 21-piece orchestration of this seminal atonal operatic masterpiece, one could only think "stripped down" and "Berg on a budget."

But what was presented at San Francisco's Yerba Buena Gardens on January 30, however, turned out to be a gripping retelling of this classic, in a full-bodied manner that rarely reflected any sort of artistic compromise whatsoever.

Everything in life is a trade-off, of course. For a big performance of Wozzeck, a big theatre is needed, with much of the audience at a distance remote from the action. At Yerba Buena's 757-seat Novellus, viewer-listeners had the opera in their faces and ears. And what faces, voices, and sounds! Beginning with John Duykers, as the Captain, simultaneously projected behind the performers as if from a 1920's newsreel. Both Duykers and Philip Skinner (the Doctor) were in danger of stealing the show whenever they appeared, such with their stage presence and vocal prowess. Not to be outdone, nevertheless, were Bojan Knezevic and Patricia Green as leading man and lady (Marie). Knezevic brought pathos and power to his interpretation of this demanding role, while Green provided a lyrical lilt to her lovely Lullaby in Act I, evolving into the torment and terror of ensuing scenes.

Other supporting cast members included the menacing and commanding AJ Gleukert (the Drum Major), sympathetic and shining J. Raymond Meyers (Andres), and the lovely and strident (as called for in the role of Margaret) Erin Neff. First and Second Apprentices John Bischoff and Torleff Borstling took their turns at the comic and soulful, in counterpoint to Michael Desnoyer's brief electrifying cameo as the Madman. San Rafael fifth-grader Kai Nau made for an affecting Child, but where were his playmates in the final scene? Offstage adults, evidently.

A trumpet here, and piano there -- apart from a few obvious instrumental question marks, Rhea's practical re-orchestration kept the power of the original, and kept his relatively small orchestra quite busy over the course of the intermissionless evening, sparklingly and darkly interpreted by conductor Nicole Paiement, in an arresting staging by Brian Staufenbeil. Imaginative set and lighting from Matthew Antaky worked in, shall we say, parallel with Austin Forbond's engaging cinematic imagery. The final scenes brought it all together musically and visually, as Wozzeck drowned in a pond of smoky dry ice against visions of his filmic demise (couldn't help but think of Peter Jackson's Lord of the Rings Frodo in the brief underwater scene): the summation of his life in the instrumentally brilliant final interlude (which serves as a kind of reverse prelude) mirroring the "life flashes before the eyes" of death.

Pretty great evening. Good to be alive. Appreciate it while you can -- Wozzeck, and everything else.
Posted by Mark Alburger at 9:00 PM