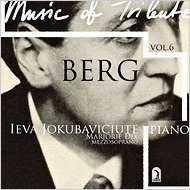 Music of Tribute, Volume 6: Berg. Ieva Jokubaviciute, Vladimir Valjarevic, pianists; Marjorie Elinor Dix, mezzo-soprano. Labor Records. "Ieva Jokubaviciute may not be a household name yet. (Far from it; it is pronounced YAY-vuh ya-ka-ba-va-SHU-teh.) But anyone who has heard this young Lithuanian pianist -- in one of her infrequent New York recitals, as a member of the Naumburg Award-winning Trio Cavatina or as a most valuable player in season after season at the Bard Music Festival -- knows that she is an artist of commanding technique, refined temperament and persuasive insight. Those traits are amply demonstrated by Ms. Jokubaviciute’s debut recording, issued on Labor Records as part of a continuing multiartist series, Music of Tribute. As in earlier volumes devoted to Bach, Debussy, Villa-Lobos, and others, the program mixes compositions by Berg with works dedicated to him or inspired by his music. Ms. Jokubaviciute’s take on Berg’s Piano Sonata (Op. 1) is lithe, muscular and transparent, creating a sense of spontaneity and play. In Four Songs (Op. 2) she sensitively accompanies Marjorie Elinor Dix, a skillful mezzo-soprano who counts among her roles Marie in Berg’s Wozzeck. The rest of the program, most of it previously unrecorded, provides a useful range of responses to Berg. Giacinto Scelsi’s furtive Poema No. 4: Passage du Poète conjures mystery and majesty. Franghiz Ali-Zadeh’s Sonata No. 1, jittery and ruminative by turns, evokes the presumed danger of embracing Berg during the 1970s in that composer’s native Azerbaijan. Other works tap into Berg’s music directly. The opening of his Violin Concerto provided the germ for Ross Lee Finney’s wistful Variations on a Theme by Alban Berg. In Reflections on Three Chords of Alban Berg Jacob Gilboa turned a frugal borrowing from Wozzeck into a gripping exploration of touch and timbre. And Hans Erich Apostel, Berg’s student and friend, transformed the fourth piece from the Lulu Suite into Variations From Berg’s Opera Lulu, an appealing gambol for piano, four hands. Here and throughout this fascinating disc Ms. Jokubaviciute is an authoritative, compelling guide" [Steve Smith, The New York Times, 11/12/10]
Posted by Mark Alburger at 7:00 PM