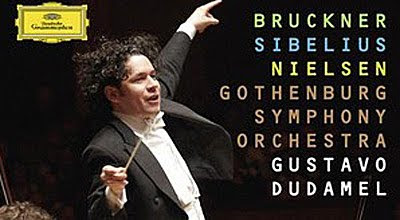 Gustavo Dudamel and the Gothenburg Symphony Orchestra: Bruckner, Sibelius, Nielsen. Deutsche Grammophon. "Gothenburg is Gustavo Dudamel’s other orchestra. His work with the Los Angeles Philharmonic and Simon Bolivar Orchestra of Venezuela is well documented on recording. But this three CD set of Bruckner, Sibelius and Nielsen symphonies, recorded live, is his first with the Swedish orchestra he has led since 2007. The Gothenburg sound that Dudamel inherited is darker and muskier than we in sunnier climes of L.A. or Caracas are used to. A sense of tradition in Sweden's second city is unmistakable, but so is Dudamel's tweaking said tradition. Sibelius conducted his Second Symphony in Gothenburg. Nielsen conducted his Fourth and Fifth symphonies, also on this set, with the orchestra. Dudamel approaches the scores with a contagious sense of wow, learning odd and wonderful music from musicians in whose DNA it flows. But he also eggs on these Swedes. The strangeness of Nielsen is gripping. Dudamel’s Sibelius sails on wings of celebration and his excitement at the symphony’s end is over the moon (check out the Finale on YouTube)" [Mark Swed, Los Angeles Times, 9/13/11]. 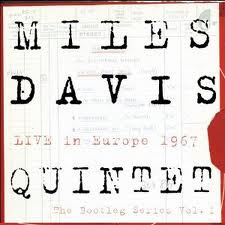 Miles Davis. Live in Europe 1967: The Bootleg Series Vol. 1. Columbia/Legacy. "[I]t captures Davis’s finest working band at its apogee, straining at the limits of post-bop refinement. As the subtitle suggests, some of this material has circulated in bootleg form; the DVD footage, from Germany and Sweden, was featured in one of the recent Legacy doorstoppers. But Live in Europe 1967, as an objet d’art, still feels momentous. The music sounds staggeringly contemporary, pointing toward some crucial attributes of our present jazz era even as it ratifies, more firmly than ever, the singular dynamism of Davis’s 1960s quintet. And as the first release in a series of previously unsanctioned music -- the plan is to put out at least one a year for the next several years -- it answers the question of what we could possibly hope for from a Miles Davis estate that has already exhausted the catalog, more than once and in more than one sense. . . . He was a bandleader whose resourcefulness was matched only by his restlessness. There are more distinct phases in Davis’s career than in most artists of his stature, and a lot of the transitional evolution took place onstage, at the hands of some of the most gifted American musicians of the 20th century. Among them were the members of Davis’s second great quintet: the pianist Herbie Hancock, the saxophonist Wayne Shorter, the bassist Ron Carter and the drummer Tony Williams. With the exception of Williams, who died in 1997, these are all still major figures in jazz, shapers of the language. (Just so we’re clear: Williams was one of those too.) By the end of 1967 they had been a working unit for more than three years and had recorded four albums, all gleaming with intrigue. Among their cohesive trademarks were a slippery, open-ended approach to harmony and a magically elastic way with rhythm" [Nate Chinen, The New York Times, 9/8/11].
Posted by Mark Alburger at 6:00 PM