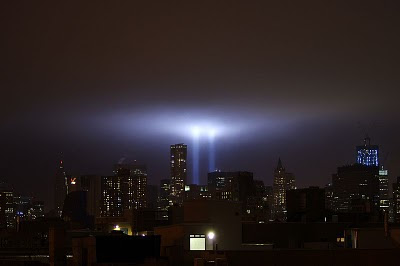 New York was abuzz with 9/11 activity and Fashion Week when I was there the second week of September for a working vacation. There were of course 9/11 musical events all over town, and the media, ever ready to milk a hot story, commemorated and pontificated on the 10th anniversary of "the attacks" -- with special editions crowding the newsstands and shelves of Duane Reade and CVS. The musical events on that overcast day ranged from uptown at Merkin Hall where clarinetist and composer Kinan Azmeh told me he and his pianist and fellow composer Dinuk Wijeratne played a set as part of a Musicians in Harmony program which celebrated New York's enormous ethnic-cultural diversity, while composer-pianist Jed Distler went it alone at The Jazz Gallery on Hudson, scant blocks from ground zero, where I saw a few cops in navy blue out on the street.

How does one respond to an event of the magnitude and horror of 9/11? Distler's solution was to write 110 for 911 (2003), for speaking pianist and electronics, from the Bob Holman curated collective poem Tower Two, which combined efforts of 110 poets -- the number of stories in the tower -- famous and obscure.

Distler's 911 skillfully theatricalized both moment and mood with a large compendium of styles which underscored, amplified, and sometimes played against the words, from the stark opening, to Holman and Eileen Myles' "In times of crisis, poets lose words. Find some: / soul, soul I say..." to strident passages, with clusters at "love should be put into action" which alternated with nearly motionless lyric ones, and different kinds of vernacular music, including boogie woogie. But there was never a sense of pastiche in the equally wide-ranging music and text, sometimes recorded, but more often spoken or sung by Distler, with hair-trigger timing.

Any piece stands or falls on the inspiration and technique of its performer and Distler's technique combines a thorough grounding in the classical tradition with solid jazz chops, his assaults on the piano sometimes evoked the visceral force of the great and not well enough known Randy Weston. 110 for 911 is an accomplished work, and the small but deeply attentive audience in the gallery's intimate space seemed both entertained and moved. Distler followed it with 2 touching encores – Ellington's exquisite The Single Petal of a Rose and a Bill Evans-like ballad for a new friend. Because maybe as one line in Distler's has it "We are all just walking each other home."

We're vulnerable. That's all.
Posted by Mark Alburger at 9:00 PM