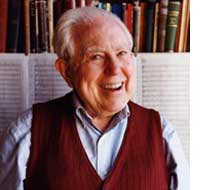 Birthday tribute to Elliott Carter, featuring the world premieres of String Trio and A Sunbeam's Archicture, and the U.S. premieres of Trije glasbeniki, Retracing III, and Double Trio. 92nd Street Y, New York, NY. "This celebratory event [also] features . . . six solos and duets composed between 1992 and 2009 for Carter's close musical friends. The first of the world premieres, String Trio (2011), spotlights the viola and is dedicated to the evening's performers: violinist Rolf Schulte, violist Richard O'Neill and cellist Fred Sherry. The largest of Carter's newest compositions is A Sunbeam's Architecture (2010) for tenor and chamber orchestra, inspired by the poetry of E.E. Cummings during the period of World War I and incorporating selected texts by the poet, and featuring tenor Nicholas Phan. Of the three U.S. premieres, the first to be performed in the program is a trio for flute, bass clarinet and harp, Trije glasbeniki (2011). The work title is Slovenian for 'three musicians' and is dedicated in part to Virgil Blackwell, who performs it at this performance with Marie Tachouet and Bridget Kibbey. Peter Evans performs the U.S. premiere of Retracing III (2009) for solo trumpet. Both Trije glasbeniki and Retracing III [were] premiered at Slovenia's Slowind Festival in November, which is honoring Carter's life and works. The last of the territorial premieres is Double Trio (2011) which was first performed in October 2011 in celebration of the inaugural concert at the Bourgie Concert Hall at Montréal's Museum of Fine Arts. Double Trio is scored for trumpet, trombone, percussion, piano, violin and cello. Other works on the program at 92nd Street Y include Bariolage (1992) for solo harp; Duettino (2008) for violin and cello; Figment IV (2007) for solo viola; Figment V (2009) for solo marimba; Hiyoku (2001) for two clarinets; and Retracing (2002) for solo bassoon. The musicians performing each of these works comprise several virtuosos and champions of Carter's complex music, including bassoonist Peter Kolkay, clarinetist Charles Niedich, double bassist Donald Palma, and oboist Stephen Taylor. Ryan McAdams will conduct A Sunbeam's Architecture and Double Trio" [Boosey & Hawkes, 11/11].

Axiom in the premiere of Elliott Carter's Three Exloprations (2011), plus Milton Babbitt, and Pierre Boulez's Sur Incises (1998). Alice Tully Hall, New York, NY. "Carter has written 15 new works since his 100th birthday. . . . Three Explorations [is] a substantial new song cycle, built on stanzas from T. S. Eliot’s Four Quartets. That was the sixth Carter premiere in New York this week. . . . Like many of his works of the last 15 years, Three Explorations is couched in a rugged but inviting harmonic language. Usually it is hard to say exactly how or where Mr. Carter has rounded the edges of what was once a forbidding style, but here it is clear: the vocal line, though chromatic, is supple and shapely, and responsive to Eliot’s involved, introspective text. Occasionally a strain of lyricism takes over, to the point where you would not immediately identify the work as Mr. Carter’s if you walked in while it was in progress. The final bars of the first song, The River, sound as if they were the work of Samuel Barber. Evan Hughes, the baritone soloist, projected the three songs with gracefulness and clarity, and the accompanying ensemble -- clarinets, flutes, trumpets and trombones (three each) -- played with an impressive fluidity under Jeffrey Milarsky‘s baton. The instrumental writing reflects both Mr. Carter’s longstanding interests and his recent stylistic shift more fully. The music is hardly triadic, and its rhythmic interplay can be daunting. Not to suggest that Mr. Carter’s earlier music was superficial, but his writing here is calmer and more deeply probing. Mr. Milarsky opened the program with Milton Babbitt‘s All Set (1957), a score meant to fuse jazz timbres -- the ensemble includes two saxophones, trumpet, trombone, piano, bass, vibraphone and trap set -- with 12-tone techniques. The combination is not as outlandish as it may seem. Composers like Mel Powell and Gunther Schuller worked in both languages, and Mr. Babbitt was known to be interested in jazz and musical theater. But I have rarely heard a performance of All Set that brings the score’s jazz moves as fully into the spotlight as Axiom’s energetic account did. At times you could almost swear that Mr. Babbitt had abandoned his tone rows and written pages of outright swing music. The second half of the program was devoted to Pierre Boulez‘s Sur Incises (1998), for pairs of pianists, harpists and percussionists. Axiom’s players, clearly reveling in its tactile, changeable textures, gave it a precise, shimmering performance" [Allan Kozinn, The New York Times, 12/13/11].

Make Music Winter: The Gaits. High Line Park, New York, NY. "Encased in pouches with a small speaker attached to the outside, iPhones dangled from belts and wrists. They emitted dings and chatters as some 60 people began strolling . . . . The sounds slowed or speeded up according to the pace, and they evolved every block or two, sometimes evoking vibraphones or soft electric guitar notes. When a stroller stopped, an electronic organ chord rose up, encouraging the person to move on. Suddenly, at a sculpture featuring sleek bird feeders, a chorus of chirping arose. . . . Modeled after Fête de la Musique, an annual affair in Paris started in 1982, the New York version is in its sixth year. The founder of Make Music New York is Aaron Friedman, a composer and political activist who decided it was time to add a winter solstice edition. In an interview, he said winter has plenty of musical options, including numerous 'Messiahs' and 'Nutcrackers,' which 'can get a bit predictable.' He continued, 'I like those pieces, but giving people the choice of doing something much wackier and fun and artistically significant is something we ought to be doing.' The events included a crowd that rang color-coded bells on command; a medley of holiday songs played by percussionists at 1/120th speed while walking the length of Broadway; a sing-along to the songs of Egypt’s favorite pop singer, Umm Kulthum, down Steinway Street in Astoria, Queens; a continuous performance of the prelude from Bach’s Cello Suite No. 1 on F train platforms; an early-music processional with lanterns through Central Park; and a roving brass-band performance in which players read music projected onto buildings. . . . Mr. Friedman began his organizing career by establishing a group to lobby against car alarms. 'I just hated the noise of New York,' he said. After a brief period in Wisconsin, where he worked on the presidential campaign of John Kerry, he returned. 'I realized I really care about music most of all,' he said. 'I don’t mind noise. I just mind car alarms.' The Gaits was organized by three composition graduate students at Princeton, Lainie Fefferman, Jascha Narveson and Cameron Britt, with the help of an iPhone app expert, Daniel Iglesia, whom Ms. Fefferman called a 'programming ninja.' The High Line gave financial support to the composers, and Make Music New York bought the 50 mini-speakers, which were handed out at the bottom of the High Line near Gansevoort Street. . . . Mr. Iglesia designed an app, The Gaits, that when downloaded, used the iPhone’s tilt sensor to detect motion and GPS function to pinpoint where the user was. The composers divided the High Line into 18 zones. As each was crossed, the sounds changed. The composers came along for the walk, but Ms. Fefferman could not participate. 'That’s the irony,' she said. 'I’m too poor to have an iPhone. But I’m getting one' [The New York Times, 12/22/11].

Make Music Winter: Patrick Grant's Tilted Axes. Rivington Guitaris to St. Mark's Church, New York, NY. "The musicians -- roughly 20, with guitars plugged into miniature, battery-powered Danelectro amplifiers -- had just finished a circuitous 85-minute journey . . . . The procession proved a fascinating barometer of New Yorkers’ tolerance for mild artistic eccentricity. Most people whose paths the ensemble crossed either smiled and stopped to watch, or scarcely glanced at the players, as if a parade of amplified guitarists was something you were likely to see at any time here. A few happenstance listeners clapped to the rhythms of Mr. Grant’s piece -- a series of simple, repeated chord progressions, to which a few players contributed spicy lead lines -- and others joined the parade. No one seemed impatient or put out. And many a cellphone was drawn to document the performance. Mr. Grant and his colleagues -- among them, the guitarists Larry Simon, Angela Babin, Alex Baxter, Cristian Amigo and Nick Didkovsky -- ended the piece inside the church after circling its auditorium a handful of times. They probably could have played for another 85 minutes, but on a signal from Mr. Grant, they produced a final, briskly strummed cathartic chord" [Allan Kozinn, The New York Times, 12/22/11].

Alan Gilbert conducts the New York Philharmonic in Maurice Ravel's Mother Goose and La Valse, and orchestrations of Franz Schubert songs by Benjamin Britten and Max Reger. Avery Fisher Hall, New York, NY. "The clarinet lines that wind through Britten’s scoring of Die Forelle, punctuating the vocal line, is an inspired touch, and if giving the menacing bass figure that animates Erlkönig to the cellos seemed predictable, Reger’s version taps the song’s drama ably. . . . Gilbert and his players gave a finely detailed, painterly account of Ma Mère L’Oye, with a good deal of warm, gracefully turned solo playing within the larger textures, and colorful, vivid percussion work. Mr. Gilbert and company closed the program with a full-power performance of La Valse that captured the shimmering spirit of the ballroom but did not neglect the undercurrent of wistful nostalgia for what was, in Ravel’s time, a vanishing culture" [Allan Kozinn, The New York Times, 12/29/11].
Posted by Mark Alburger at 7:00 PM