Playing and Singing for Ringing In / Phillip George 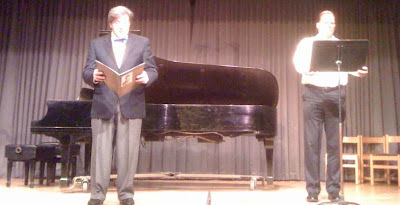 For new-music enthusiasts, the year-end holiday season can be a fallow time, given over to the charmingly traditional in both classical and popular music circles, so what a joy to happen upon Goat Hall Productions' continuation of its Fresh Voices Festival of New Works, finishing its 11th year with a New Music New Year's Bash.

Hyperbole aside, this program proved to be an intimate gathering at San Francisco's Community Music Center Theatre, with a 10pm, January 31 start that almost guaranteed a celebratory 12th-hour conclusion.

Paradoxically the show was on the sober side, despite liberal amounts of bubbly, with composers often defaulting to the new-music-norm of the serious aspects of life, beginning with Nancy Bloomer-Deussen's lovely Adirondack Morn, performed by the composer-pianist in her winningly neoclassic signature style.

John Bilotta checked in with the soulful Yeats Songs cycle, in a powerful reading by Tristan Robben, accompanied dexterously by the composer in a music of atonal adventurousness. A related haunting quality -- though more postminimally tonal -- was found in Philip Freihofner's Where My Breathing Whispers, which found soprano Eliza O'Malley in rapturous counterpoint to Kelsey Walsh's sensitive pianism.

Returning to matters instrumental, Martha Stoddard offered a punchy Duo for Bassoons, pointedly punctuated by Lori and Michael Garvey, magnified into a Quartet for Two Oboes and Two Bassoons, augmented by the plangeant tones of Friehofner and Alburger.

The new compositional discovery of the evening was Dylan Greengard, who provided solo guitar virtuosity in The Plight of Josef K. and Bullfight with Self, as a winning post-minimalist, who expanded his palette for The Wrath of Poseidon to include gorgeous violin playing from a colleague.

Alburger wrapped up the proceedings with Business As Usual, a live, pre-recorded, and electronic performance piece supplemented by new videos, first seen several weeks previously at Stage Werx, and apparently well-received in these strikingly different arenas.