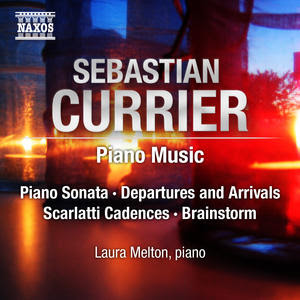 Sebastian Currier. Piano Music: Piano Sonata, Departures and Arrivals, Scarlatti Cadences, Brainstorm. Laura Melton, piano. Naxos. "Each of the solo piano works on this recording of music by Sebastian Currier is a feast for performer and listener alike. The American composer writes in a style that is at once accessible and piquant, clearly structured yet full of fantasy. Currier has an uncommon knack for moulding works of vital expressive content. The repertoire spans nearly two decades, revealing Currier’s debts to previous masters but also his distinctive way of rendering material his own. The earliest work, from 1988, is the Piano Sonata, a five-movement score of vibrant design whose rhythmic vivacity and thematic unfoldings are matched by an atmospheric sense of sonority. Currier’s command of counterpoint shows his devotion to Bach. From 2007 is the six-movement Departures and Arrivals, which lives up to its title in the way the thematic images evolve throughout the score. The metamorphoses are subtly achieved, with many cross references and tweaks that add fresh resonance to the original ideas. Scarlatti Cadences and Brainstorm are shorter works from the 1990s, the former a vigorous contemporary spin on the baroque composer’s style and the latter a dynamic study in myriad harmonic worlds. Currier’s piano music requires the services of an artist who can tame formidable technical beasts and bring colourful delineation to a multiplicity of moods and textures. Laura Melton is just such a musician. Her performances are crisply articulate, rich in contrasting hues and attentive to the panoply of significant gestures that make Currier a composer of notable inventiveness and magnetism" [Donald Rosenberg, Gramophone, 11/11]. "The American composer Sebastian Currier was still a student at the Juilliard School when he wrote his Piano Sonata (1988), his only work in the genre. But the score already displays the hallmarks of his later pieces: exuberant energy, boisterous rhythms, emotional intensity and a broad coloristic palette. The violinist Anne-Sophie Mutter is among the prominent soloists who have championed Mr. Currier’s music recently. The five-movement sonata is featured on a disc of his piano music, performed expressively and with dexterous flair by Laura Melton, who teaches at Bowling Green State University in Ohio. The structure, counterpoint and harmony of the sonata allude to Beethoven, Bach and Hindemith; the percussive drive shows the influence of Prokofiev. The mood of each section is aptly reflected by the titles. Jaunty rhythms are layered into a feisty canvas in Bold and Defiant, and slow, murky musings lend a desolate air to Suppressed. Multifarious, the densely textured finale and the longest movement, consists of a theme and variations complete with two fugues. In the booklet notes Mr. Currier writes that even small compositional choices always leave him wondering how a score would have sounded had he made different musical decisions. In Departures and Arrivals (2007) he explores roads not taken, using the same materials to create six alternative versions of the same work. A Tune, A Shift, and A Dialogue begin in a similar vein, then take different turns. In A Transformation, A Dialogue, and A Glimpse, the process is more abstract. In Scarlatti Cadences (1996), Mr. Currier views the Baroque composer Domenico Scarlatti through a contemporary prism, interspersing misty textures with sparkling, driven passages. The disc concludes on a fiery note with the witty, relentless Brainstorm (1994)" [Vivien Schweitzer, The New York Times, 12/22/11].
Posted by Mark Alburger at 6:00 PM