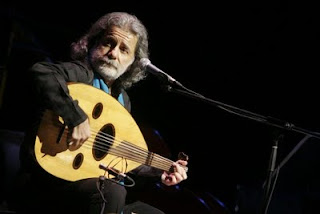 What can one say about artists as revered in the Arab world -- or as Philip Glass would say ''that part of our world" -- as Lebanese composer-oud master-singer Marcel Khalife and the late great Palestinian poet Mahmoud Darwish (1941-2008) other than that their work conspires to join our estranged hearts in this relentlessly divided world. These simple truths came home when Khalife and his 12-member Al Mayadine Ensemble played a 2-hour plus concert on April 22 at UC Berkeley's Zellerbach Auditorium to a deeply attentive and warmly responsive audience.

Words and music are sound as sound, and what is sound but a fusion of the public with the private which Khalife and Darwish's work has always celebrated. Words and music have to be necessary like bread or water if they are to have meaning, and the sounds here could have drawn tears from a stone because Khalife treats his listeners as equal partners.

It doesn't hurt that his vocal settings have always been unfussily direct, even childlike simple, unlike some of his American counterparts who clot their settings with accidentals -- a holdover from the New Vienna School and its imitators -- to make them "deep." Khalife and Darwish are aided and abetted by Arabic music's quarter-tone anchored modes with their innately expressive resonance, and by the language's vowel with consonant combinations so different from Hebrew's largely consonantal ones, to say nothing of English with its impossibly unmusical diphthongs, like "spring."

I know because my poem dead serious -- for Mahmoud Darwish (1941-2008) was recently beautifully translated into Arabic by the gifted young Palestinian artist/filmmaker Ahmed Walweel, who made its shadowed phrases sound a lot more musical. And what beauties in this program.

"Prepare the land for me so I can rest / because I love you until I'm weary ... / Your morning is fruit made for song / and the evening's made of gold /" Darwish says in The Pigeons Fly (Yateer el Hamam), which Khalife sang with slowly building insistence as his oud and Mark Elias' double bass drone seemed to come from beneath time. " The voices -- Khalife's. his wife Yolla's, and Oumayama Khalil's -- in Her Eyes (Aynaha). Khalife's ensemble, like Glass's, Paul Dresher's, or Steve Reich's, serves the practical demands of his music and all were superb and deeply accomplished here.

The French accordionist Anthony Millet -- Lebanon was of course a French protectorate -- dovetailed his sounds into Omar Guey's violin. The Romani Ismail Lumnanovski coaxed highly ornamented gipsy, klezmer, duduk, and even western flute-like sounds from his clarinet, and Kenan Adnawi -- oud -- and Feras Charestan -- quanoun -- from tragically embattled Syria, supplied evocative supportive colors. And the percussionists. The Macedonian Aleksandar Petrov on the Balkan parade drum tapan -- you can see it in Darwish's funeral www.youtube.com -- which he, both seated and seated -- hit vigorously with 2 large and small sticks. Michel Baklouk -- on Arabic tambourine -- riq -- and Hafez El Ali Kotain -- on the Arabic taba, or dumbeck -- brought their sounds center stage.

Or as someone once said -- "The avant garde's the oldest thing in the world," which is why Khalife and Darwish's work means and continues to mean much to so many, because it never left the room of the house where our collective hearts have always lived.
Posted by Mark Alburger at 9:00 PM