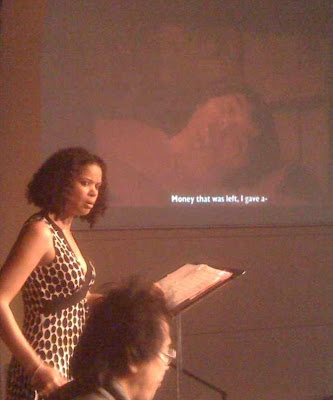 April 14th marked a day for musical greatness, as Not Shy and Retiring: Mark Alburger's 55th and Friends was held at the Community Music Center in San Francisco. None can argue that having so many accomplished musicians perform in a single night isn't extraordinary. The first performance of the night was a great one. Sarita Cannon sang Samuel Barber's Sure on this Shining Night. This was certainly a wise opening gambit in musical beauty. Next was Ann Calloway's Vladimir in Butterfly Country. With the composer at the piano, bass Richard Mix offered great yet equally compelling contrast, and the story behind the song proved surprisingly engaging.
More great soprano singing followed with Annemarie Ballinger in Craig Cornelia's Flight and Kurt Weill's Stay Well. Then the instrumental ante was upped in Steven Greenman's In torbe funem vind (In the Sack of the Wind), as Darren Sagawa offered excellence in his violin, along with pianist Alla Gladysheva, and soprano Heather Klein. Oboe-d'amorist-composer Gary Friedman displayed more instrumental variety in his Three Happy Oboists, where he was joined by Thea Davidson and Moria Little, the latter on English horn. The otherwise unaccompanied double-reed sounds grew weary to the ear, however, and individual movements were additionally arguably cliched. Despite all this, the instrumentalists did their best in performing these rhythmically complex pieces.
Pianist Mikako Endo performed Alden Jenks's Unrestful Sleep and provided redeemed interest to the recital. The music was expertly realized, despite the fact that this was possibly the most difficult work presented. Next, John McGrew's Three Haiku Songs took the stage. While soprano Maria Mikheyenko was definitely in the spotlight, it was still noteworthy and impressive that presenter Mark Alburger was revealed an oboist as well, further proving the expansiveness of his musicianship. Pianist-composer Helena Michelson was next up to demonstrate her musical prowess in The Game. After this, Sheli Nan's Saga: I Want a Man on a Motorcycle turned out to be the first theatrical presentation of the night (unusually late in the game, considering Goat Hall's reputation as a music-theatre organization). While the story behind the theatrics was interesting, and Nan obviously has a deep artistic mind, it was a little strange to hear such conventional music being mixed with contemporary themes.
The anticipation was put to rest when the man of the hour, Alburger, went on stage for the performances of his most recent compositions. The first "Novel" of The Decameron was performed with soprano Cannon, bass Wayne Wong, and Alburger singing tenor. This piece was the most unique of the entire presentation. With interesting words and back story, what instantly grabbed the listeners' interest were the tremendous tempo changes. Breakneck speeds are commonly risky, yet Alburger certainly made them work. Triple Concerto for Bassoon, Contrabassoon, and Harp ("Family") topped all as the best performance of the evening. Despite the fact that Alburger is wont to deprecate his piano playing, he is actually quite talented in this arena as well. A most arresting aspect of the work was harpist Samantha Garvey's command of her instrument, in counterpoint to the expert playing of her parents, bassoonist Michael and contrabassoonist Lori. With only the quartet of players, one looks forward to the complete orchestral performance of this piece in June with the San Francisco Composers Chamber Orchestra. Without a doubt, Mark Alburger's 55th and Friends was an impressive and influential series of performances.
Posted by Mark Alburger at 9:30 PM