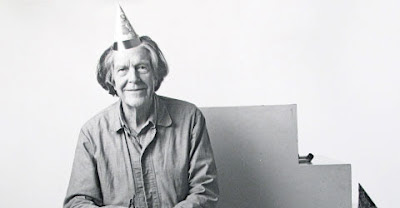 John Cage -- whose 100th birthday will be celebrated on September 5, 2012 -- continues to influence and inspire composers and listeners around the world.

While his pre-chance works, particularly the prepared piano works of the 1940's such as Sonatas and Interludes (1948), earned critical acclaim, his adoption of chance operations in 1951 cost him a number of friendships and led criticisms from fellow composers. Pierre Boulez and Karlheinz Stockhausen, both formerly on friendly terms with Cage, dismissed indeterminate music, the former criticizing him for "adoption of a philosophy tinged with Orientalism that masks a basic weakness in compositional technique."

Prominent critics of serialism, including Iannis Xenakis, were similarly hostile: the adoption of chance in music was "an abuse of language and . . . an abrogation of a composer's function."

The cynicism with which this departure seems to have been made is symbolized in Cage's account of a public lecture: "Later, during the question period, I gave one of six previously prepared answers regardless of the question asked. This was a reflection of my engagement in Zen." Such works as 4′33″ and Imaginary Landscape No. 4 (24 performers on 12 radios) are of enormous importance representing the complete abdication of the artist's power.

While much of Cage's work remains controversial, his influence on countless composers, artists, and writers is notable.

Cage's indeterminacy, allied with his rhythmic structural experiments and interest in sound, influenced a number of composers, including close associates Earle Brown, Morton Feldman, and Christian Wolff, and Fluxus / minimalist composers, such as La Monte Young, Terry Riley, Steve Reich, and Philip Glass. Many of the English experimental school acknowledge his influence, including Gavin Bryars, who studied under Cage briefly, and Michael Nyman.

In this centenary year, Cage celebrations are being held around the world throughout the year. A partial list up to the composer's September 5, 2012 birthday includes: