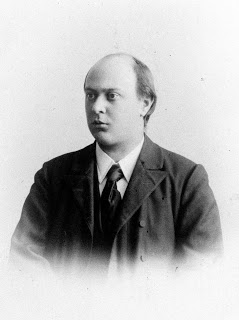 "My music is not modern, it is merely badly played."

Triskaidekaphobia came honestly to Arnold Schoenberg from day one (b. Arnold Schönberg, September 13, 1874, Vienna, Austria), born to an Ashkenazi Jewish family in the Leopoldstadt district (in earlier times a Jewish ghetto), at Obere Donaustraße 5, and continuing to his death (July 13, 1951).

Although Schoenberg's mother Pauline (nee Nachod, 1848-1921), a native of Prague, was a piano teacher, the composer's musical instruction began at eight, with violin lessons.  The year after the death of his Bratislavian shoestore-owning father Samuel (1838-1890), Arnold was obliged to take work as a bank clerk for about five years.  During this time his friend, violinist Oskar Adler, continued Schoenberg's music education, and Schoenberg supplemented this by teaching himself to play the cello.

In about 1894, he composed a set of piano pieces and joined a small amateur string orchestra.  The ensemble was directed by composer Alexander von Zemlinsky, two years his senior, and they became fast friends.  In the ensuring years, the duo played their compositions for each other, including a collection of piano duos (1896), and Schoenberg credited Zemlinsky with being his prinicipal teacher.

The four-movement String Quartet in D Major is Schoenberg's earliest extant work of large scale.  Zemlinsky gave Schoenberg much advice and criticism during its composition, and even showed an early draft to Johannes Brahms, who gave its approval.  Completed in the autumn of 1897, it was premiered privately on March 17, 1898, and publicly later that same year, with Zemlimsky's help, on December 20 in Vienna.  The work was a success (one of the few for many years), and both composers felt it signified a new stage of Schoenberg's artistic development.

Schoenberg converted to Lutheranism that year and lived by orchestrating operettas.  Here begins his first eight works given opus numbers, all on, or inspired by-- love texts -- beginning with the lengthy Two Songs for baritone, Op. 1 (1898), after Karl Michael von Levetzow (1871-1945), cast in sonata-influenced forms, featuring lush counterpoint and asymetrical melodic lines.

The next works add two numbers apiece, beginning with Four Songs, Op. 2 (1899), the initial three on texts of Richard Dehmel (1863-1920), who was also soon to inspire Op. 3, No. 3 of Six Songs, Verklarte Nacht, Op. 4, and Op. 6, No. 2.  Dehmel's eroticism (he was twice prosecuted for blasphemy and obscenity and twice exonerated) finds poignancy in Schoenberg's hands, with precious chromaticism and beautiful arpeggios, for instance, in the opening Erwartung (Expectation) -- a title which returns years later in Marie Pappenheim's libretto for the composer's Op. 19.  Other composers to be inspired by Dehmal included Richard Strauss, Max Reger, Alexander von Zemlinsky, Anton Webern, Ignatz Waghalter, and Kurt Weill.  A cascadingly erotic setting of Johannes Schlaf (1862-1941) makes for a charming conclusion.

The one-movement string sextet, Verklärte Nacht (or Transfigured Night), Op. 4 (1899), was composed in just three weeks (rapidity would be Schoenberg's hallmark in a number of pieces, including Pierrot Lunaire, Op. 21, 1912).  The work was inspired by Richard Dehmel's like-named poem, along with Schoenberg's strong feelings upon meeting Mathilde von Zemlinsky, his friend's sister.   Verklaret Nacht can be divided into five distinct sections which refer to the equivalent stanzas of the literary endeavor.

Here Schoenberg succeeds in combining Brahms's structural logic with Wagner's harmonic innovations.  The work was turned down by the Vienna Music Society for an initial performance in its year of composition, due to a single "nonexistent" (uncategorized and unpermitted) inverted ninth chord.  The composer remarked "and thus [the work] cannot be performed since one cannot perform that which does not exist."  The work indeed employs a rich chromatic language far from its home key of D minor.  Several distinctive "leitmotif"-like themes are introduced, each subsuming the previous. There is perpetual dissolution, variety, and recombination, that Schoenberg characterized as "developing variation," again simultaneously evoking Brahms and Wagner.

Gurre-Lieder (w/o Op.) -- Schoenberg's massive cantata for five vocal soloists, narrator, chorus and large orchestra -- is based on poems by the Danish novelist Jens Peter Jacobsen, translated by Robert Franz Arnold).  It began, in 1900, as a song cycle for soprano, tenor and piano for a competition run by the Vienna Composers' Association, but was according to the composer, "finished . . . half a week too late for the contest, and this decided the fate of the work."  Later that year, he radically expanded his original conception, composing links between the first nine songs as well as adding a prelude, The Wood Dove's Song, and the whole of Parts Two and Three.

Schoenbergian controvery continued the next year, as protests broke out when songs from Op. 1-3 were sung at a concert in December.

In October 1901, he married Mathilde Zemlinsky, the sister of Zemlinsky.  They moved to Berlin that December, where Schoenberg obtained work at the Uberbrettl cabaret, writing at least one such song -- Nachwandler -- that was subsequently performed once.  Their daughter, Gertrud (1902–1947), was born the next year.

Transfigured Night was controversial when it finally was premiere by the Rose Quartet, on March 18, 1902, in the Vienna Musikverein, due to the harmony and Dehmel's explicit sexual references.

The symphonic poem Pelleas und Melisande, Op. 5 (February 1903), is Schoenberg's first numbered non-vocal work, yet still based on a literary source -- that of Maurice Maeterlinck as suggested by Richard Strauss.  When Schoenberg began the composition, he was unaware that Claude Debussy's opera was about to premiere in Paris.  The work is, like Transfigured Night, in a D minor of  one continuous movement with inter-related sections.  It makes the first notated use of a trombone glissando in the section where Golaud leads Pelleas to the underground tombs.  Theme groups, similar to the leitmotif, which are associated with individual scenes or people, form the building-blocks of a symphonic development.

Fellow older post-romantics Richard Strauss and Gustav Mahler recognized Schoenberg's significance as a composer -- Strauss when he encountered the continually-evolving Gurre-Lieder, and Mahler after hearing several early works.  The former was sufficiently impressed to obtain for Schoenberg a teaching post at the Stern Academy.
In Gurre-Leider, Schoenberg utilizes sprechstimme (song-speech) -- his first use of the effect so tellingly utilized in such works as Pierrot Lunaire and A Survivor from Warsaw, Op. 46 (1947). This combination of semi-spoken text with instrumental accompaniment stems from melodrama, a genre much in vogue at the end of the 19th Century.  By 1903, Schoenberg abandoned the mammoth task of orchestrating Gurre-Leider and moved on to other projects.

Schoenberg began teaching harmony, counterpoint and composition in 1904. His first students were Paul Pisk, Anton Webern, and Alban Berg, the latter two ultimately constituting with their teacher a Second or New Viennese School.

Pelleas und Melisande was premiered on January 25, 1905, at the Musikverein in Vienna under the composer's direction in a concert that also included the first performance of Alexander von Zemlinsky's Die Seejungfrau.  Reception of Schoenberg's work was cool and the orchestra ill at ease.

The again one-movement String Quartet No. 1 in D Minor, Op. 7 (1905) lasts longer than 45 minutes.  Begun in the summer of 1904 and completed in September 1905, it is remarkable for its density and intensity of orchestration.  The extended tonality includes quartal harmony, and carries a small collection of themes which recur in many different guises.  Additionally, Schoenberg makes use of "musical prose," favoring asymmetrical phrases that build into larger cohesive "sentences."  The first performance was given in Vienna on February 5, 1907 by the Rose Quartet after extensive rehearsal.  According to Schoenberg, when he showed the score to Gustav Mahler, the elder composer exclaimed: "I have conducted the most difficult scores of Wagner; I have written complicated music myself in scores of up to thirty staves and more; yet here is a score of not more than four staves, and I am unable to read them."

Typical of Schoenberg's vocal collections, the Six Orchestral Songs, Op. 8 (1905), are variously based on Hart, Des Knaben Wunderhorn, but unusually on Francesco Petrarca (1304-1374, in translations by Karl August Förster, 1784-1841).  The pieces are intense and lush miniatures, written close to the time of the birth of the composer's son, Georg (1906–1974).

The single-movement (surprise) Kammersymphonie (Chamber Symphony) No. 1 in E Major, Op. 9 (1906), for 15 instruments (Flute/Piccolo, Oboe, English Horn, Eb Clarinet, Clarinet, Bass Clarinet, Bassoon, Contrabassoon, 2 Horns, 2 Violins, Viola, Cello, and Double Bass), lasts approximately 20 minutes and is a well-known example of the use of quartal harmony.  The two opening themes are based respectively on superimposed perfect fourths and the whole-tone scale -- the distinction between melodic and harmonic dimensions becoming blurred.  The work was premiered on February 8, 1907 in Vienna by the Rose Quartet together with a wind ensemble from the Vienna Philharmonic, under the composer's baton.

In that year, the composer began to win public acceptance, with Pelleas und Melisande receiving acclaim at a Berlin performance.  But it was not to last...
Posted by Mark Alburger at 10:00 PM