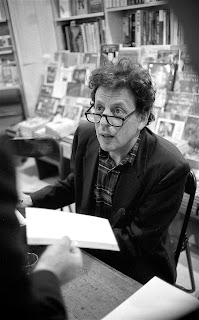 Anniversaries are always welcome occasions, and the Santa Cruz-based Cabrillo Festival of Contemporary Music celebrated its 51st year with a typically varied series of programs of which I alas only caught one on August 10, at the Santa Cruz Civic Auditorium.  Festivals are mix and match affairs, and the program paired pieces by two "emerging" composers -- Enrico Chapela (b. 1974 ) and Andrew Norman (b. 1979 ) -- with the latest symphony by Philip Glass, led by Brad Lubman, who along with Carolyn Kuan, served as co-music director for Marin Alsop.

Hearing divergent voices in the same room is both a challenge and a pleasure though it was hard to know at first encounter what Norman and Chapela had up their sleeves.  Were they full-[grown artists or just up and coming ones?  Norman more or less got off the hook with Unstuck (2008) which he said was about his writer's block, or "how can I stitch bits and pieces into a coherent whole"?  It's a tried and true modernist ploy which in the hands of someone like Poulenc, who was accused of being a pasticheur, can sound both surprising and new. but in Norman's was a mostly stop-and-go effort which wanted at once to be a serious endeavor and a romp.  Rambunctious Ives-like material shared the stage with what sounded like send ups of jazz and rock, plus seco or espressivo writing a la Mahler or the New Viennese School.  The dial kept turning but to little avail, though Unstuck worked perfectly well as a curtain raiser which Lubman and company rendered with vigor and point .

Mexican composer Enrico Chapela's electric cello concerto Magnetar (2011), which he wrote for Berlin-based Johannes Moser who premiered it with the LA Philharmonic and played it here, is a horse of a different color, but not quite.  It observes the Baroque-Classical three movement fast-slow-fast with cadenzas, but mostly failed to put new wine into these old bottles.  Chapela's remarks from the stage made me fear that his idea of barely-glimpsed star phenomena was better than his realization could ever hope to be.  Still the interplay between the canned Moser cello which was hooked up to a patch and was all silhouette with its guts out -- is this post-modern life in a nutshell? -- and his live accomplices kept one awake, though it felt like five movements instead of three.  And it didn't help that Chapela found time to diss from the stage yet seemed to glancingly quote three of the best cello concertos in the Western canon: Haydn, Dvorak, and Elgar.  It was brash, bold, and frequently loud, and the massed overtones clotted on the verge of pain.  Philip Glass's Symphony No. 10 (2012) aced the night, not because he's a famous composer, but because simplicity has been the biggest casualty in the modernist wars.

Glass's music however is rarely simple yet always clear, and great composers from Monteverdi to Verdi have written clearly and succinctly, even Brahms and Beethoven, and you could call the latter's Symphony No. 5 minimalist because it's reduced to its bare elemental essentials.  The Glass 10 is equally succinct and its five movements go inevitably from its first to last note.  His trademark syncopations are here, plus his 3+ 2 or 3 and 2 combinations which function as lead or inner voices often disguised.  The music advances logically and with point, its textures growing generally more complex with each successive movement, though there's nothing as extreme as the piercing piccolo tritones in the third and final movement of the composer's massive and more densely scored Symphony No. 9 (2012).  It's virtuosic, superbly orchestrated , and its densities and rhythms both cross and contrary surprise and even startle the ear.  Lubman and his overworked band observed the letter but not the spirit of the work, and his percussion and string sections sometimes seemed to "spell" their parts instead of embedding them into the musical sentence.  It was amusing to hear the audience applaud after movement one, and erupt in cheers after a nanosecond pause at the end, as they did at the Tenth's UK London Proms premiere this summer in a tighter and more convincing reading by Nicholas Collon and his Aurora Symphony.
Posted by Mark Alburger at 9:00 PM