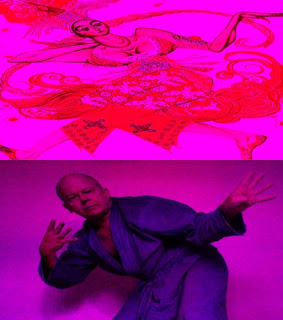 The Opus Project presents Opus 8 (August 31) was a concert of parts and wholes, mostly of the 8th numbered selections of 20th- and 21st-Century composers.  On the whole, the event was well-planned and co-ordinated, and quite well done.

The storefront Berkeley Arts Festival, however, leaves much to be desired, being in a rather dangerous area, with difficult parking, and uncomfortable, claustraphobic seating, much of which was rather too close to the orchestra.

With all these drawbacks, the orchestra still managed to sound sensational.  By no means was this music easy to perform, but these excellent musicians, who come together to rehearse just one day before the performance, did a tremendous job.

Sopranos Sarita Cannon, Megan Cullen, and Letitia C. Page projected their parts well, but were still overpowered by the orchestra at times.  Their diction could have been somewhat clearer, since texts were at times difficult to understand.

Although Cannon's voice was beautiful as always, it was challenging to follow the English lyrics of the supposedly comic number, Harry Bernstein's Mary Had a Little Lamp."  Despite a questionable rhythmic flow and not terribly-engaging melodic line, Cannon succeeded nonetheless in selling the piece.

Bela Bartok's Romanian Folk Dance: I, presented in video form, proved over-long and taxing.  By contrast, however, three selections from Igor Stravinsky's Firebird were quite arresting in a stupendous performance by The Opus Project Orchestra.

Darius Milhaud's Suite for Piano: I was performed by virtuoso Elizabeth Lee, who incredibly learned the piece overnight.  She played gracefullly this intricate work, in a refined manner.

The Paul Hindemith Phantasiestuck from Three Pieces for Cello and Piano began with a lovely melodious sound, then moved into very dissonant territory.  Again Lee contributed her talented playing to the great mellow sounds of Elizabeth Morrison's cello.

The introductory section of Kurt Weil's String Quartet No. 1 came accross nicely, despite a language which seems to suggest performers at odds with one another.  On the other hand, the beginning of Dmitri Kabalevsky's own essay in this genre contains enough sweetness to ameliorate the occasional clangor, in a lovely melodic adventure..

The keyboard seems to carry all the dissonance in Dmitri Shostakovich's Piano Trio No. 1 in C Minor, with very sweet sounds coming from violin and cello.  Written in 1923, the music seems to mirror the madness of the era, with enthralling passages towards its conclusion.

The March from Mark Alburger's The Twelve Fingers was stimulating and most enjoyable, as an updated rival to John Philip Sousa's classic endeavors.  Works by Jan Pusina, Michael Kimbell, and Stardust seemed to merit further thought.

The biggest surprise was the program's conclusion with an unbelievable explosion of musicianship in 24-year-old Michael Stubblefield's March of the Defiled Horde.  An amazing, astonishing, and awesome work, again from The Opus Project Orchestra.
Posted by Mark Alburger at 9:00 PM