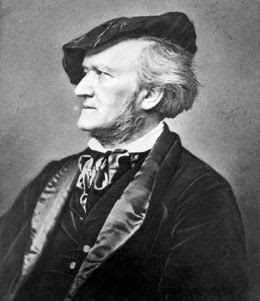 Jonathan Carr. The Wagner Clan: The Saga of Germany's Most Illustrious and Infamous Families. Atlantic Monthly Press. "Every summer, the lucky few with hard-to-get tickets traipse to Bayreuth in Bavaria for the opera festival that [Richard] Wagner himself created in 1876. . . . They are even welcomed by his octogenarian grandson, Wolfgang. . . . [I]n his second wife, Cosima, Liszt's daughter, [Richard] found a partner even more virulently anti-Semitic than he. After Wagner's death in 1883, the story turned still darker as Cosima, who outlived the composer by 47 years, fell under the influence of Houston Stewart Chamberlain, an extreme right-wing Briton whose writing on race influenced the Nazis and who married Cosima's daughter, Eva. A rare glimmer of decency was provided by Wagner's only son, Siegfried, a conductor and composer in his own right, who lived in fear that his bisexuality would become known. His punishment was to marry another ghastly Briton, Winifred Williams-Klindworth, who as early as 1923 had become infatuated with Hitler. . . In 1930, Cosima and Siegfried died within months of each other, and Winifred took charge of the Bayreuth festival, which from 1933 enjoyed Hitler's full support. Hitler was also a frequent visitor to Wahnfried, the Wagner family home, where he was the beloved 'Uncle Wolf' to Winifred's four children. Even during the war, he remained close to the family, visiting Wolfang in the hospital after he was wounded in Poland and keeping Wolfgang's older brother, Wieland, out of uniform. Hitler favored Wieland as the festival's next director -- and was proved right. In 1951, the festival reopened, with Wieland and Wolfgang co-directors but Wieland the creative force. When Wieland died . . . Wolfgang became sole director and, as such, keeper of the family secrets, noting in his autobiography that 'neither my brother nor I had any reason to put on sackcloth or beat our breasts in remorse.' Today, Wolfgang, nearly 90, is bent on imposing Katharin, his 29-year-old daughter from a second marriage, as his successor at Bayreuth over the candidacies of his oldest daughter, Eva, and his niece, Nike. So the show goes on" [Alan Riding, The New York Times, 2/3/08].
Posted by Mark Alburger at 7:00 PM