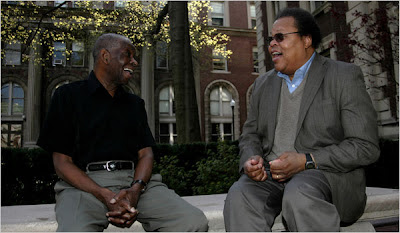 George Lewis. A Power Stronger Than Itself: The A.A.C.M. and Experimental Music. University of Chicago Press. The pianist and composer Muhal Richard Abrams . . . laid the groundwork for the Association for the Advancement of Creative Musicians, an organization that has fostered some of the most vital American avant-garde music of the last 40 years. Though noncommercial, often pointedly conceptual and unabashedly arcane, this music has had a profound influence over the years on several generations of experimental musicians worldwide. Reconstructing that inaugural meeting from audio tapes, Mr. Lewis conveys not only Mr. Abrams’s aim but also the vigorous debate begun by his notion of 'original music.' (Whose music? How original?) From the start, it’s clear, the association expressed its firm ideals partly through collective discourse. . . . Lewis narrates [The Association's] development with exacting context and incisive analysis, occasionally delving into academic cultural theory. But because the book includes biographical portraits of so many participating musicians, it’s a swift, engrossing read. “I told George, ‘It’s like you wrote a Russian family novel of the A.A.C.M.,’ ” said the critic Greg Tate . . . Mr. Abrams reflected on the book and the organization last week in a conversation on the roof terrace of the apartment building in Clinton where he has lived since 1977. 'The A.A.C.M. is a group of individuals who agree to agree, or sometimes not to agree,' he said. 'Our cohesiveness has been intact because we respect each other’s individualism.' Mr. Lewis, the Edwin H. Case professor of American music and the director of the Center for Jazz Studies at Columbia University, offered a similar thought. 'As I saw it,' he said in his office, 'here’s a group of people who had a robust conversation going on, with basically no holds barred, and yet managed to manage their diversity without falling apart, without falling into factionalism.' Such is the basic philosophy of an association once pegged by the jazz critic Whitney Balliett as 'a black musical self-help group.' Three years ago, as part of its 40th-anniversary celebration, some clearer definitions emerged at a colloquium presented by the Guelph Jazz Festival in Ontario. The saxophonist Roscoe Mitchell began by recalling how the organization grew out of the Experimental Band, led by Mr. Abrams on the South Side of Chicago. 'We wanted to have a place where we could sponsor each other in concerts of our original compositions; provide a training program for young, aspiring musicians in the community; reach out to other people and other cities; and have exchange programs,' he said. Noticeably absent from Mr. Mitchell’s description, and from the language of the early planning meetings, was the word jazz. This was partly in keeping with the arm’s length the organization intended to establish between its art and the commercial realm of nightclubs, then the de facto setting for any African-American art music. Partly, too, these musicians were concerned with a breadth of style that reached beyond jazz, to encompass serious classical composition, as well as music from Africa and the East. Having inherited the new freedoms of 1960's jazz innovators like John Coltrane and Ornette Coleman, the artists in this movement were ready for a next step, one they could claim as their own. 'This is a book about mobility and agency,' Mr. Lewis said. He links this impulse conceptually to the Great Migration, illuminating how the association’s first generation came from families that had moved to Chicago from a postslavery South. . . . Mr. Lewis’s book takes a cleareyed view of the historic tensions between the Chicago and New York chapters of the association. Within his narrative those tensions sit side by side, unresolved, as they are in real life. The flutist Nicole Mitchell, a younger member of the organization who now serves as its first chairwoman, suggested as much in an e-mail message this week: 'New York and Chicago will continue to be very distinct organizations.' . . . The association’s practices can also be found around [New York] on a regular basis, thanks to artists like the pianist Vijay Iyer, a nonmember who has worked extensively as a sideman with Mr. Smith and [Roscoe]. Mitchell. . . . For Mr. Lewis, who began work on A Power Stronger Than Itself more than a decade ago as a professor in the music department at the University of California, San Diego, the association presents a continuing story . . . Mr. Abrams made much the same point. 'Certainly there has been great development, and I think at the base of that development is constant work,' he said. And at the heart of that work? Originality, of course. Or as Mr. Abrams put it, 'The word and the work are the same.'" [Nate Chinen, The New York Times, 5/2/08]. 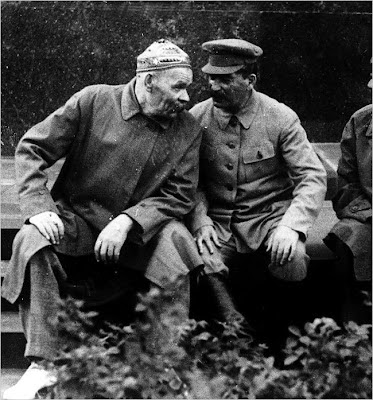 Solomon Volkov. Magical Chorus: A History of Russian Culture From Tolstoy to Solzhenitsyn. Translated by Antonina W. Bouis. Alfred A. Knopf. "The more things change, the more they. ... But they do change, actually. . . . [T]he Russian 20th century is over, and not just chronologically. Never again will culture be imbricated with politics in the way Volkov describes in this book. Never again will a dictator seek moral and political guidance from a novelist, as Stalin did from Maxim Gorky in the 1930's. And never again will a new novella be read aloud to a dictator to see if it should be published in a literary journal, as Aleksandr Solzhenitsyn’s One Day in the Life of Ivan Denisovich was read to Khrushchev in 1962. (He liked it.) In this sense, at least, Russia has entered the modern age. When Solzhenitsyn returned from exile in 1994, the new Russian state paid him the highest compliment it could think of: a 15-minute talk show on state television. But Solzhenitsyn didn’t know how to use the medium -- instead of inviting celebrity guests, he just talked at the camera about the country’s problems -- and the show was canceled after six months. 'The unceremonious canning of Solzhenitsyn’s program, which pleased some,' Volkov writes, 'was seen as a sad symbol of the era by others.' Volkov seems to think it was a sad symbol, but it’s a little hard to tell. It’s hard to tell because nothing would appear less magical' -- Volkov’s title comes from Anna Akhmatova’s description of the young poets, led by Joseph Brodsky, who appeared in Leningrad near the end of her life -- than the string of exiles, suicides, torture sessions and murders that make up the history of 20th-century Russian culture. Volkov knows about all of these and does not leave any of them out; in fact, in 300 pages of thumb-nail sketches of artists, writers, musicians (Volkov is a musicologist by training) and filmmakers, as well as the dictators and secret police chiefs who hounded them, Volkov manages to leave out almost nothing. He has kept up with the latest developments in the historical record as they have emerged in memoirs and archives. And he dutifully provides quick physical descriptions of the major players. Mayakovsky? 'Tall and handsome.' Pasternak? 'Dusky Bedouin face, burning eyes.' The émigré feuilletonist Sergei Dovlatov was 'very tall, dark and handsome, resembling the actor Omar Sharif.' Lenin at least is accorded the honor of being described by Gorky. The only thing missing from Volkov’s book is moral outrage. Despite his background as a quasi dissident -- his first book, a series of conversations with Shostakovich, caused an international sensation upon its publication in 1979, after the Soviets mounted a strenuous campaign against it -- the lone score Volkov is interested in settling (and this only in a footnote) is with the British historian Orlando Figes, who panned his last book in The New York Review of Books. Volkov is not outraged because, in his view, he is telling a triumphant tale. In the book’s livelier second half, he narrates the post-Stalin era as a story of the irreversible liberalization of the arts, a liberalization that eventually spread to the rest of Soviet life. He may overstate the political significance for the arts, but even the crudest of crude oil determinists will admit that the yearning of the Soviet intelligentsia toward the West helped demoralize the regime. Volkov also spends some time on his own milieu, the émigrés and exiles who came to Paris, Boston and especially New York in the 1970's. Solzhenitsyn, thundering from his Vermont hermitage against the Soviets and, increasingly, the decadent West, was a distant presence for these émigrés; their true avatar was Brodsky, of Mount Holyoke and the West Village. For a 20th-century Russian writer, Brodsky was notably apolitical — or, put another way, art was his politics. His poetry, partly confessional, partly metaphysical, held as its highest value the sanctity of the private self. Brodsky was anti-Soviet as a matter of course, but also a cosmopolitan. 'Like a despotic sheik ... untrue / To his vast seraglio and multiple desires,' he wrote in Lullaby of Cape Cod, 'I have switched Empires.' The only constant was poetry, music and art. 'I close my eyes and almost see them standing in their dilapidated kitchens, holding glasses in their hands, with ironic grimaces across their faces,' Brodsky wrote about his generation. 'Liberté, égalité, fraternité. ... Why does nobody add culture?’ This is the world that Volkov came from (it is also the world this reviewer’s parents came from), and though Brodsky is not given disproportionate space in Magical Chorus, he is still the ruling spirit. What makes this book such an interesting document is that it represents the current state of mind -- I’m tempted to say the final word -- of that generation of which Brodsky was the finest specimen. It is a generation that has been powerless to stop Putin from terrorizing their country, not because they feared him, but because after the destruction of the Soviet Union they retreated into private life,' which is what they wanted all along" [Keith Gessen, The New York Times, 5/4/08].
Posted by Mark Alburger at 5:00 PM