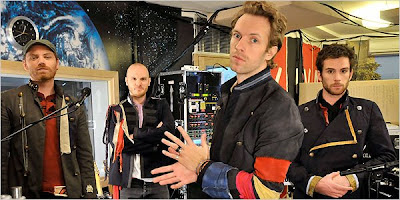 Coldplay. Viva la Vida or Death and All His Friends. Capitol.

Philip Glass. Songs and Poems; "Tissues" from "Naqoyqati." Wendy Sutter, cellist; David Cossin, percussionist; Philip Glass, pianist. Orange Mountain Music, CD. "Glass has written relatively little for solo instruments, perhaps because rhythm and texture are often crucial to the way his works unfold. But his recent “Book of Longing” (2006), a setting of Leonard Cohen poetry, included striking solo interludes, and one of the most ear-catching was a cello piece, performed in concert and on Mr. Glass’s recording by Wendy Sutter, the cellist in the composer’s ensemble. Mr. Glass went on to write Songs and Poems (2007), a set of seven movements for unaccompanied cello (outpacing Bach by one in his six suites) for Ms. Sutter. The work is already freighted with lore: Mr. Glass and Ms. Sutter fell in love during its composition, affording future music students a 21st-century Robert and Clara Schumann story, except that Mr. Glass is not barking mad. Oddly, given that undercurrent, Ms. Sutter is quoted in the notes describing the work as “massively tragic.” Mr. Glass has never been a Schumannesque Romantic; even the most heartfelt, dramatically pointed scenes in his operas are the work of a careful rationalist. And at first the principal difference between this and earlier Glass works is that his repeated phrases are so intricately chromatic that repetition seems a necessity rather than a technique; you need to hear the music again to mine all its implications. But the shift toward the dramatic begins by the third movement, and you finally see what Ms. Sutter means when you reach the work’s centerpiece, Song V, with its intensely arching melodies, implied dialogues and passionate double-stopped passages. Ms. Sutter’s rich-hued, supple playing conveys that passion and drama vividly, and she is equally compelling in a varied selection of movements from Mr. Glass’s Naqoyqatsi film score (2002)" [Allan Kozinn, The New York Times, 6/1/08].

Franz Schmidt. Das Buch mit Sieben Siegeln (The Book With Seven Seals). Chandos.. I"t doesn’t help your legacy as a composer to give the Nazi salute in 1938 at the premiere of your greatest work. Nor is it good for your cause to tell a young Herbert von Karajan that he has no future in conducting. So it may not be a total surprise that the Austrian composer Franz Schmidt is little known to the wider world, given his difficult character and distasteful political associations. Yet Schmidt has a dedicated band of prominent interpreters on the podium, among them Franz Welser-Möst, Fabio Luisi, Nikolaus Harnoncourt and Neeme Jarvi. The latest champion to emerge is Mr. Jarvi’s son Kristjan, whose 2005 live recording of Schmidt’s masterpiece, that 1938 work Das Buch mit Sieben Siegeln (The Book With Seven Seals), has just been released by Chandos. Das Buch is a strange and intense work, a sprawling, dense and complex oratorio based on the less-than-cheery biblical Book of Revelation, which Kristjan Jarvi calls 'an official guide to the worst-case scenario.' I t features organ solos, huge choruses, contrapuntal passages reminiscent of the Bach Passions, and orchestral writing that is delicate and monumental. There are operatic vocal quartets, a heldentenor St. John the Divine and a Wotan-like Voice of God. Schmidt, who had a near-fatal heart attack while writing Das Buch, distilled Revelation into something close to a narrative. But the essentially mysterious, symbolic nature of the book, with its scenes of violent destruction, plague, war and redemption, remains. The piece has stuck in my head since college, when a roommate added a recording someone had given him to the communal record shelf. Gleefully, we used to play one section in particular for its gloriously menacing and unattractive sound. The passage depicts the opening of the second seal and the unleashing of the Red Horse of the Apocalypse, the bringer of war. 'Kill, strangle, slay the foe! Murder, destroy, slay the foe!,' as the English translation has it. Now, several decades later, the arrival of the new version by Mr. Jarvi, a hip, unconventional musician, has prompted deeper exploration and raised troubling questions. Schmidt was born in 1874 in Pressburg (now Bratislava, Slovakia). He and contemporaries like Alexander Zemlinsky (a refugee from the Nazis and thus on the other side of the political fence) are part of a second tier of big-scale symphonists overshadowed by Bruckner and Mahler. But their music is worth mining, and Mr. Jarvi said he hoped his recording would lead to 'a small, or maybe not so small,' resurgence of interest in Schmidt’s music. 'I see him really as this great Mahlerian-type composer who really has a lot to offer to the world,' Mr. Jarvi, 35, said from Vienna, where he lives. Mahler is a name that keeps coming up in connection with Schmidt, who attended the conservatory in Vienna as a teenager, studied composition with Bruckner and joined the cello sections of the Vienna Philharmonic and the Vienna Court Opera at 22. He taught cello, piano and composition at the conservatory and later became director and rector. A year after he joined the Court Opera, Mahler arrived as conductor. Mahler recognized Schmidt’s talent and made him principal cellist, reportedly wanting him to play every performance Mahler conducted. But the two men, striving to get on the symphonic map, became rivals. Mahler 'tried not to help him in every possible way,' Mr. Luisi, the conductor, said. Schmidt also stirred up enmity in the orchestra, prompting some musicians since to say that the technical difficulties of the symphonies are revenge on orchestra musicians everywhere, Mr. Welser-Möst said. Another problem critics find in his music is a lack of individuality amid the smorgasbord of stylistic references. Bits of Bruckner, Brahms and Wagner flash by. The closest connection is to Mahler, Mr. Welser-Möst said. 'But what audiences won’t find in Schmidt’s music is the sort of naïve touch which Mahler in the first five symphonies definitely has,' he added. That quality worked against Mahler in past decades, Mr. Welser-Möst said, but now holds special appeal for audiences. Schmidt’s political associations have also hurt his standing. The Chandos liner notes say he gave the Nazi salute at the first performance of Das Buch on June 15, 1938, three months after Germany’s annexation of Austria. Commentators, in hindsight, inevitably linked the piece to the apocalypse that was to come to Europe. Schmidt supported Hitler’s rise to power, Mr. Welser-Möst said, and later worked on a cantata glorifying the German resurrection.' Mr. Jarvi said: 'He was put into that little Nazi sympathizer box. That’s not exactly the label you want to have'" [Daniel J. Wakin, The New York Times, 5/25/08].