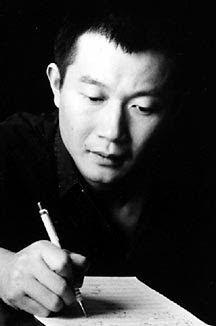 Some 20 years ago, I was still planting rice in China. And now I’m conducting orchestras in all the great concert houses of the world: La Scala, the Met, the Berlin Philharmonic. I still can’t believe it.

One plus one makes one.

Hunan is the home of philosophy, of yin and yang, of shamanistic culture. It has good feng shui.

Just imagine. We’ve got permission to perform The First Emperor on the Great Wall of China for the Beijing Olympics. We’ll have a worldwide audience of billions!

Imagine, you were told to report to an office and made to swear to leave your family, to feed pigs, to plant rice, for your entire life. I cried. How could I do this for my entire life? In fact, the required length of time depended on the purity of your thoughts.

Everyone experienced bitterness, but I had fun. The farmers, who were experts in ghost operas, couldn’t let anyone hear their songs. But I found a way around this by setting Maoist texts to their folk melodies. Everybody understood the ruse, and they loved it. Since then I became an avant-gardist, not from New York, but from that village in Hunan.

The traditional ghost opera has three acts: you welcome the ghost, you entertain the ghost, then leave with the ghost. [T]he last life, our present life and the next life.

People were so hungry. Professor [Alexander] Goehr completely reopened the door for us. It was like hearing the stories of 1001 Nights. We were so fascinated. It was so new to us. Because our beloved professor influenced me so much, I spent years trying to catch up with Schoenberg’s atonal music. But it’s too easy to lose yourself in a system like that, and I caught cultural jet lag. I remember Professor Goehr telling us to avoid ethnic content, to be neutral and independent. But right after he left, I tried to use Beijing opera and folk music. If you want to be a Chinese avant-garde artist, the safest way is to stick to your grandmother’s tone. The most dangerous way is to follow Western music from the Romantics to 12-tone. This period is poison. I could only use the techniques as a recipe for my fusion cooking.

If you are too sophisticated, you lose courage. [Theory] makes for more boundaries. Competing with the Europeans, by being more sophisticated, is to resist yourself. One plus one makes one. Yin and yang, inside and outside, honesty and pretension. I have practiced this philosophy for the last 20 years.

The farmers were more open [to The Map] than the civilized bourgeoisie. They touched the cello, because it was shiny and beautiful and they were worried that it was too cold. They talked to the instrument as if it were alive, in the spirit of the ghost operas.

I used folk resources [in On Taoism and Nine Songs] to compete with the 12-tone system, as a challenge to Goehr and Schoenberg.

When I came to New York in 1986 to study composition at Columbia University, I lived downtown. At first I didn’t know how to bridge the musical distance between uptown and downtown. At Columbia, you immediately got into the atonal system. But downtown is so diverse: jazz, rock, the Blue Note, the Village Gate, the La MaMa theater. So I got jet-lagged. But I found a way to fix the distance. At night, downtown, I would meet with Meredith Monk, John Cage and Philip Glass. My jet lag between uptown and downtown reminded me where I was from. I looked back to the Eastern music I played before moving to Beijing. It all came back to me through my fascination with experimental music in downtown New York. Greenwich Village taught me about Chineseness from a world point of view.

Before John Cage, I didn’t pay attention to Lao-tzu or the I Ching. But every time I spoke to Cage, it was as if I were talking to Lao-tzu, not an American, not John. We had dialogues about music in a very philosophical way — everything is an unanswered question.

I’m a Marco Polo going backward from East to West.

It’s not just listening to music. Also, the way we’re eating dinner, no more just French, Italian; we eat Mexican, Cantonese, Russian, Indonesian, Japanese. . . . [Globalization offers new opportunities] not to standardize, or neutralize, but by giving people a chance to be seen.

[Commercialism] is inescapable. You can’t avoid being commercialized. I don’t want to be, but I cannot resist it. I’m pushed that way. If my name is not a brand of Chinese culture in the avant-garde, Peter Gelb is not going to be behind me at the Metropolitan Opera.

[The First Emperor] will no longer be a Western form, as it is no longer an Italian form. In the shamanistic sense, there is no East or West; all is human. Plácido and Zhang Yimou are also shamans.

A major commission from China is still focused on patriotic things. Like Shostakovich, sometimes we have no choice. But you can still express yourself. By doing Symphony 1997, I could study bronze bells and introduce Yo-Yo Ma, as well as Western concepts, to China. There’s a way to educate the Communists without using their methods. The First Emperor reflects my own life, and that of Shostakovich.

To me, it is the way for shamans to behave. I want to be playful, like a child, teasing the world, teasing the whole system. That is Taoism. It is not about political or cultural messages. It is a performance. Performance art.

I have no ego. The ego is to illustrate philosophical strangeness, to be a musical Taoist. And you know what? This strangeness helps my business. I have always worked with the best orchestras in the world. And never once did one of them fail to ask me back.
Posted by Mark Alburger at 10:00 PM