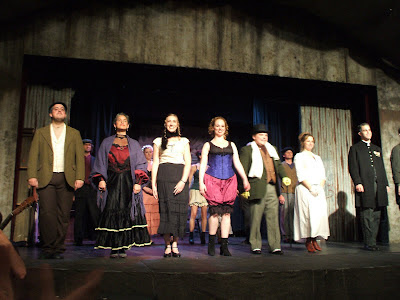 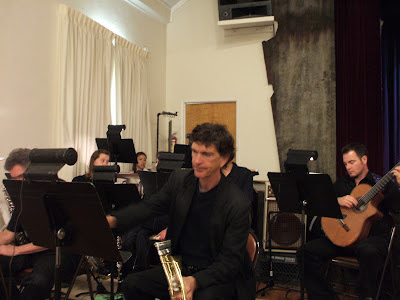 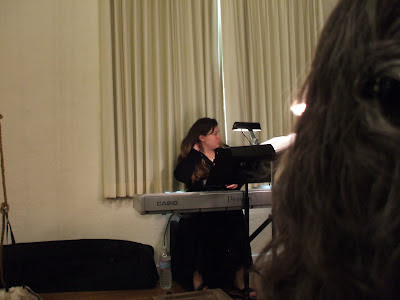 electric piano and lacking bassoon, banjo, cello, and bass, and a few other niceties according to the Philharmonia score), but also equally impressive dramatically and vocally, with a dark 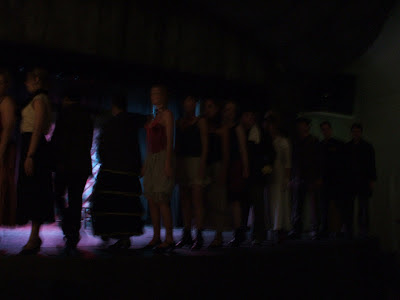 with a dark yet radiant supporting cast of whores, 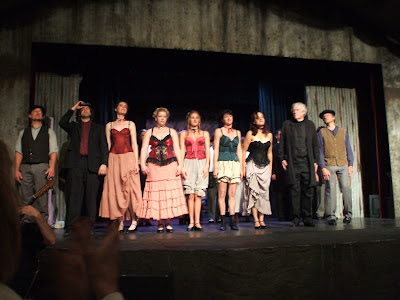 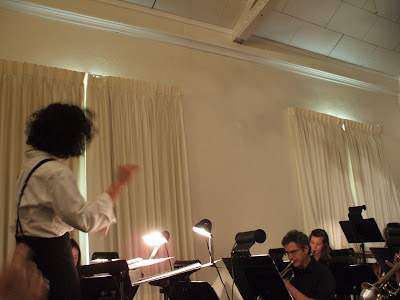 conducted by Maya Barsacq and directed by Daniel Helfgot.

This was a demonstrative and edgy production, right from the Overture's downbeat, where Welch was able to evoke the in-your-face aggressive energy of the original German even in Blitzstein's tamed-down lyrics for The Ballad of Mack the Knife.

Vieira's accented, powerful Peachum was perfectly balanced by Revera's voluptuous tone and presence -- the pair able to bring out both the comedy and menace in Peachum's Morning Song, Instead of Song, Ballad of Sexual Dependency, and Useless Song.

Russ made for an intriguing Polly -- beautiful, ditzy, with a surprising tough-as-nails psychic split that surprises even her, and totally believable. She smoked her way through Pirate Jenny and took no prisoners, then recaptured her poignant side in her Love Song with MacHeath.

And, yes, as for J. Raymond Meyer's Mac the Knife? Older, wiser, more dignified yet funnier, again completely believable as a loveable charmer despite or because of his big, boyish good looks. And can he sing? Most definitely, putting across a steller Cannon Song with partner-in-crime-on-the-semi-legit-side-of-the-law Sascha Joggerst, who gave off a credible dichotomy of macho and milquetoast in the oft-caricatured role of Tiger Brown.

If the singers were all on their toes to keep projecting over the prominent accompaniment, it somehow just lent more angsty spritit to this spirited production, where even the thieves chorus Wedding Song was not allowed to simply lie down and enjoy itself.

The First Threepenny Finale had the parodic operatic schtick required and the Second had its knives out. Wigle's turn at Jenny manifested a beauty and psychosis in her increasingly, impressively angry Pimp's Ballad, ably abetted by Meyers. Paselk was in cahoots as well, for a touching Barbara Song and a hair-raising Jealosy Duet with the coquetish Russ, where the orchestra's increasingly dynamic performance proved a challenge.

Meyers captured the irony, humor, and pathos as necessary in The Ballad of the Pleasant Life, Call From the Grave, and Grave Song, in some ways still as plucky as a politician down on his luck. Wigle knew all about it in her worldly-wise rendition of Solomon Song.

The Third Threepenny Finale put some members of the audience on the run, just as much as the fugitive MacHeath had been earlier, as a too-small-hangman's noose descended from the front middle ceiling of the seating. Welch's Messenger was a wild cross between recitative and speech, and the entire ensemble -- including sexy whores Miya Mikheyenko (Dolly), Lane McKenna (Betty), Samantha Bartholomew (Molly), Danielle Crook (Marie), and Nicole DeBergalis (Coaxer); dashing thugs Dan Galpin (Matt), Richard Gaughan (Jake), and Eric Vineberg (Bob); and manly man-o'-the-cloth Bruce Cozinni (Reverend Kimball) -- gave their all.
Posted by Mark Alburger at 8:00 PM