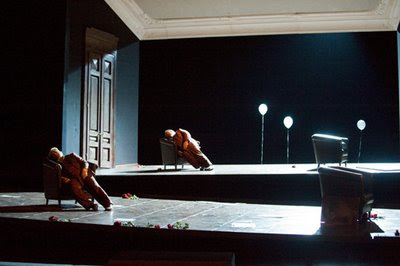 Years ago when visiting Bruges, Belgium, I didn't get any sense that the locals were fretting over the characterization of their fair city as Bruges-la-Morte (The Dead City of Bruges), the title of Georges Rodenbach's 1892 novel. If there are any lingering 116-year-old resentments, they can be laid to rest in the San Francisco Opera's lively presentation of Erich Wolfgang Korngold's Die Tote Stadt (The Dead City), based on the Rodenbach.

Concert and film composer Korngold and his 1920 smash-success opera both fell out of favor in the intervening years, but are on a course of revival, and this co-production -- first given in 2004 at Vienna and Salzburg and presented now from September 13 through October 24 at the War Memorial -- makes a persuasive case.

The music is wonderful: a colorful post-Puccinian, Straussian score tinged with New Viennese danger (though the composer and his co-librettist, music-critic father were clearly not of the Arnold Schoenberg / Alban Berg camp). Not that the initial story or stage action seem promissing.

A man ("Paul" -- changed from "Hugues" in the Rodenbach -- is it a co-incidence that Erich's father's pseudonym was "Paul Schott"?) pining for his dead wife for how long? Get over it! A woman, beautiful of voice and visage (Emily Mcgee as Marietta) appears, who is the living image of the departed (Mcgee doubling as Marie), and he fails intially to go for her? In the words of one of the Pink Panther movies: "What, are you blind?" "Yes!"

The set (original production by Willy Decker) and singing save this early scene (Act I, actually), with a simple set of stark chairs on a violently raked stage, under a looming white ceiling, backed by black graffiti-stewn walls and graced with a giant reproduction of John Singer Sargent's Portrait of Miss Elsie Palmer (1890, the first of numerous manifestations of this painting throughout the evening). To this, add the shining sonics of Torsten Kirl (Paul), Mcgee, and Lucas Meachem (as Paul's friend Frank), and there was not much to complain about, aside from the languid pace.

But then the action and fever perk up in Acts II and III, to really match the always high level of the music. From a series of strange, moving blue rooftops, to alarming catterwonky shifts of the Sword-of-Damocles ceiling -- the visuals matched the continuing, imaginative, unfolding surprises of the sounds and story line.

Among the most amazing visual moments was among the most effect portrayals of a staged dream state that has been seen: an exact double of the dreaming Paul and his room unfold upstage, and a team of ghost-white actors is presaged by the appearance of balloons one-by-one suddenly appearing upstage.

This was true German-style, surreal decadence that the Germans do so well. Yet as depraved and sensual-sexual as it all was, somehow it almost all kept within the realms of good taste (well, maybe the crucified maid Brigitta [Katherine Tier] scene was a bit over the top). The shocking strangulation of Marietta with the locks of the dead Marie connected with the recent John Steinbeck Mice and Men SF Community Music Center production, and the "turns out it was all just a dream, after all" conclusion made for a still-ominous denouement.

As the Gary Snyder character (Japhy Ryder) in Jack Kerouac's The Dharma Bums said, "Comparisons are odious." But this was opera on the big stage that was arresting and ultimately, in retrospect, engaging from beginning to end, with staging that was astounding (without being pandering) yet somehow essential and spare. There is seeming nothing that Conductor Donald Runnicles and Costume Supervisor Kristi Johnson cannot do in bringing a show fully into its splendor, and a good time was had by all in this uncommonly living City of the Dead.
Posted by Mark Alburger at 9:00 PM