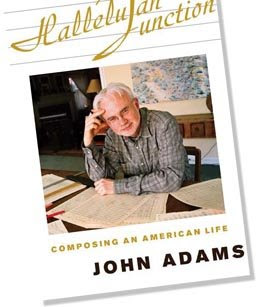 John Adams. Hallelujah Junction: Composing an American Life. Farrar, Straus & Giroux. "As he explains in his charming and illuminating memoir, Adams had a revelation in 1976, when he was a 29-year-old composer struggling to find his creative voice, and it led him to make caring the essence of his art. He was driving a Karmann Ghia convertible along a mountain ridge in Northern California, where he had moved from New England. He was playing a cassette recording of the first act of Wagner’s “Götterdämmerung,” and he found himself blurting, to himself, “He cares.” Adams, until then an acolyte of the John Cage school of conceptual sonic experimentation, was unexpectedly moved by Wagner’s high emotionalism. He thought he could feel — or, rather, he felt he could now think about -- the capacity of music to connect with its listeners viscerally, as well as intellectually. That flash of obviousness constituted apostasy in the insular, parochial society of the musical vanguard. 'What was creating such a deep impression upon me in the music of these German composers was the pure expressivity of their art,' Adams explains in Hallelujah Junction. 'What Wagner and Schumann cared about was making the intensity of their emotions palpable to the listener.' This book, Adams’s first (and, let’s hope, not his last), is a cogent account of its author’s escape from the world of ­audience-alienating “process” music absorbed with its own making and his arrival at a place where intellectual adventurism and robust emotion coexist -- a pilgrimage from the Land Without Feelings to Hallelujah Junction. There happens to be an actual location called Hallelujah Junction, a highway crossroads near the Nevada-California state line; Adams came upon it -- inspiration tends to find him behind the wheel -- and he adopted the phrase originally, 10 years ago, as the title of an exhilarating four-hand, two-piano piece that employs, essentially, just two notes. Although the sojourner scheme is a cliché among books by creative artists, politicians and pretty much everyone else, Adams plays it lightly. There is no more self-aggrandizement in this wry, smart and forthright memoir than there is in the venturesome but elegiac music of Adams’s maturity. Indeed, Hallelujah Junction stands with books by Hector Berlioz and Louis Armstrong among the most readably incisive autobiographies of major musical figures. Adams can write prose, as he has proved with articles, program notes and lectures, some of which form the basis of chapters and sections in his book. (Most of the previously published material has been improved, often by the addition of more vivid detail.) Describing the Volkswagen Beetle he drove from Cambridge to California after finishing his graduate studies at Harvard, Adams writes, 'Perhaps sensing it was being flogged into making this one last trip only to die in an alien land, it made a noise like a spoon caught in a Disposall and sputtered to a halt.' He can even be droll. 'It has occurred to me,' Adams notes in a section on creative collaboration, 'that, next to double murder-suicide, it might be the most painful thing two people can do together.' Like many of Adams’s musical compositions, Hallelujah Junction is a collage of disparate elements -- demystifying ruminations on the creative process, sharp assessments of his and his peers’ work, sweet memories of his precocious childhood in New England, rants against pomposity and indifference in all forms (especially the kind passing for nonconformity), and traditional then-I-wrote sections, all organized with careful attention to balance, contrast and propulsive effect. Adams juxtaposes and paces the components with (what else?) great care to simulate spontaneity. Among the most vigorous sections of this book are Adams’s terse critiques of other composers, past and present, in and out of the avant-garde. Copland, he writes, 'was adept at playing the role of provocateur, particularly in his gift of melding the leanness and angularity of Stravinsky with the demotic energy and raucous timbres of ’20s jazz.' Adams deftly lacerates Schoenberg, Stockhausen and Babbitt for what he hears as mechanistic severity and coldness in 12-tone music and serialism. He reveres Ives for his famous iconoclasm and formal inventiveness, while admitting disappointment in the failure of Ives’s symphonies to stir him deeply. Adams is particularly fervent and persuasive in his advocacy of lesser-known contemporary composers like Glenn Branca, who has written a symphony for 100 guitars, and Robert Ashley, who, working in a realm between music and speech, creates grand vocal pieces that Adams describes as 'meditative, seemingly improvisatory, but in fact carefully constructed' -- a description that suits more than a few of his own compositions, especially his concerto for symphony and electric violin, The Dharma at Big Sur. Much the same, Adams praises Cornelius Cardew, founder of the Scratch Orchestra, because he finds Cardew’s music 'anti-elite and antihistorical to the max' and 'fresh, playful and humanistic.' In the awe-struck impressions of the West in Hallelujah Junction ('the land . . . untamed and mysterious'), as in the evocations of open landscapes in his music, Adams makes clear his fascination with the natural world; and for a composer to admire others whose music sounds very much like his own is only natural. . . . Adams’s importance as a composer is rooted not so much in his having done anything new, but, rather, in his having done very well the things he has done . . . . With Hallelujah Junction, Adams has put in prose an argument against the ideology of aesthetic continuum, a case that his music has always articulated eloquently by example. “That particular continuum I found ridiculously exclusive, being founded on a kind of Darwinian view of stylistic evolution,” he argues. If a composition 'didn’t in some way advance the evolution of the language, yielding progress either by a technological innovation or in the increasing complexity of the discourse, it was not even worth discussing.' Who cares? John Adams. And, so, now do we" [David Hajdu, The New York Times, 10/24/08].
Posted by Mark Alburger at 7:00 PM