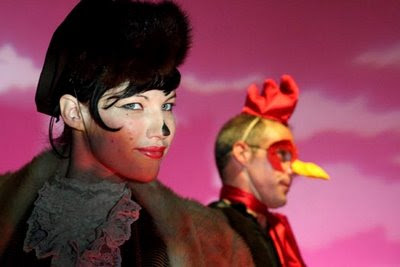 Don't judge a Stravinsky by its size. Oakland Opera's recent production (October 23 to November 2) of Igor Stravinsky's Renard (The Fox) (1916) made a compelling case for this c. 15-minute often-overlooked mini-masterpiece.

Written during World War I, while the composer was a high-class refugee in Switzerland, the work is a mixed-theatre piece for two tenors, two basses, and chamber orchestra (flute/piccolo, oboe/English horn, clarinet/Eb clarinet, bassoon, trumpet, two horns, percussion, cimbalom, and string quintet. OO slimmed and altered the ensemble somewhat, with one horn, trombone (in exile from Histoire du Soldat, the larger companion piece earlier in the evening), piano (intriguingly John Cageianly prepared-tack-piano altered), and strings limited to violin and bass (again from the Soldier's Tale), in an ingenious rescoring by pianist Skye Atman.

True confession. When my daughter was a babe in arms, I used to play this composition (along with many others) to see if a growing set of unprejudiced ears would take to 20th-century classical sounds. Evidently it worked. She used to shout, "Play the fox and the chicken, Daddy!"

And what's not to like, certainly from an engaging Oakland Opera -- from the rustic, splintered opening march; through surreally stylized musical violences (OK, I skipped some of the details when my daughter was listening to it in the days of yore); to moments of beauty and high camp. The singers sing from the pit (or, in this case, the raised platform in back) and have no one-to-one correspondence with the acrobat/actor/dancers/mimes on stage. Not only did this assist in distancing Stravinsky from his operatic upbringing (his father was an opera singer at the Mariinsky Theatre for 26 years), but it allows for onstage machinations far beyond what could be reasonably expected from bel canto vocalists.

While Ballet Russes's 1929 revival, choreographed by Michel Fokine, was said to have been "ruined chiefly by some jugglers [Sergei] Diaghilev had borrowed from a circus," here the big-top elements added to the visceral excitement. Breona Noack's Fox found her scaling two strips of cloth and doing a joint-defying split, her legs in an outstretched line ten feet above and parallel to the floor. David Hunt's Rooster spasmodicaly strutted to a finale comfortably aloft on an outstretched rope, again well-suspended above the stage.

Add to this the lithe, smiling contributions of Erin Shrader (Cat) and Jodie Power (Goat), and quite possibly among the sexiest baby chicks and foxes (Christie Welter, Abigail Munn, Artemis Anderson, and Sarah Moss) that one is ever likely to encounter, decked out respectively in feather pompom bustiers and furry brassieres -- a definite multimedia spectacular (although for once at Oakland Opera, no projected visuals beyond supertitles, which was just a fine situation). The libretto, Stravinsky's Russian own, based on Russian folk tales from the collection by Alexander Afanasyev, was translated into French by C.F. Ramuz, English by Rollo H. Myers, and co-credited in the OO's program booklet to Robert Craft -- a neat trick, since the latter was not born (1923) until after the piece's 1922 premiere.

And the singing? Oh yes, the singing. Well-executed throughout by Ben Jones, Darron Flagg, Igor Vierra, and Richard Mix, with the ensemble incisively conducted by Diedre McClure, despite the fact that some of the sound gets lost in the cavernous upper reaches of the OO's new venue (N.B. this is not your grandparents' grand opera for warhorses, but rather a rustic warehouse -- having recently moved from a smaller, yet somewhat similar space -- where resident genius composer/director/empressario Tom Dean holds forth in a stained t-shirt).

And the rest of the program? Oh yes, the rest of the program. A fine micro-mini masterpiece (Pastorale) from grand singer, Oakland Opera board member, and fellowette Dominican University musica alumna Kimarie Torres (the original Curley's Wife for my opera on John Steinbeck's [Of] Mice and Men back in the early 90's); and the ever-popular Solder's Tale.

Perhaps too popular these days. If Renard is underdone, perhaps Histoire has been heard a bit more in the opposite direction. It's still a great work, of course, and, as the Oakland Opera notes "Renard looks back, while Histoire looks forward to [Stravinsky's] neoclassic period. It also is the first of the composer's pieces to -- how shall we say this decorously...well, I guess we can't... -- show a bit of laziness, of putting in the time. While Stravinsky had never before, and probably never again, literally recapitulated so much (and so little) music, and while this does make for a singular, telling effect... Still, it's a little much. After after multiple variants of the three opening selections, I, for one, am always ready and relieved when the music finally moves on.

In this appropriate resetting of the work to the current Iraqi war, Histoire solidly joins the ranks of older stage pieces whose scenarios cannot be left alone. Winning interpretations by all-american Soldier Ben Jones, merchant-cum-Devil Mathias Bossi (who brought just the right amount of ambiguous sexual preference to the role), and soldier-girl Narrator Kirya Traber brought the witty but over-long (the words even interupted the supposed segue between the Tango and Waltz) libretto to life. Projected images of Iraq atrocities made us yearn for a proper outcome to the election (which will be known by the time this finds its way into newsprint).

Never in this reviewer's viewing has the Tango been more sensuously realized than in Munn's amorous interpretation, which directly followed her comic, mal-a-tete as a hungover Princess. And, after an evening of such winning musical theatrics, our heads were spinning a bit, too.
Posted by Mark Alburger at 8:45 PM