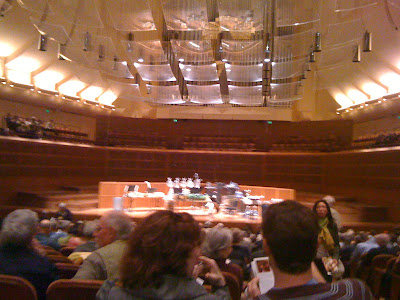 An old musical programming technique is to save the biggest piece, in terms of numbers of musicians on stage, for last. But the San Francisco Symphony Chamber Music Concert on May 9 at Davies Hall took a Joseph Haydn "Farewell" approach: progressively fewer performers were left as the afternoon unfolded.

Beginning with less of a bang than may have been expected was Nathaniel Stookey's Junkestra, for a like-named ensemble of found instruments from the Norcal Recycling Center. This engagingly witty octet is in the tradition of Paul Dresher's sound sculptures, Harry Partch's microtonal instrumentarium, and the percussion-ensemble music of John Cage, Harry Partch, and Dmitri Shostakovich. While the program notes went on at length about the Gioachino Rossini William Tell Overture quote, the gallop rhythm (short-short long) seemingly could have been derived from any number of pieces, including many by Shostakovich. Certainly the ensemble was amusing to view, and amongst the more stimulating sounds were those from what seemed to be long pvc pipes -- deep and wonderful. The eight musicians, including one exclusively on musical saw, and the uncredited conductor were spot-on throughout, and the audience appreciative.

Also well-received was the Igor Stravinsky Octet (1923) for Flute, Clarinet, 2 Bassoons, 2 Trumpets, and 2 Trombones. This is composer towards the beginning of his neoclassic period, and the three movements have balance, energy, and precision in a way related to, yet far from, the Russian crowdpleasers of the previous decade or so (The Firebird, Petrushka, and The Rite of Spring). While it's not a fair fight, after all, to hold up a little chamber work to the massive aforementioned ballets, or even the later masterworks that he was yet to write, this piece is challenging and pleasant enough in its own way, beginning with a tune-up of trumpet, baroquish-classical fanefares of woodwinds and brass, burbling bassoons and so on. If the Tema con Variazioni second movement relies a little heavily on one particular recurring variation, so be it, perhaps as a kind of mailing-in of work that he was to do later on. The musicians carried on heroically throughout this uncompromisingly exposed and rather naked work.

Compatriot Sergei Prokofiev was next featured in his String Quartet No. 2 (1941), a music stemming from the composer's later Soviet years, of more accessible and less innovative writing. Is it a coincidence that his Violin Concerto No. 2 (1935), heard earlier this year in the same hall, bears similar imprints, and is simililarly uncharacteristically "unProkofievian"? Possibly. Violinists John Chisolm and Florin Parvulescu, violist Christina King, and cellist Barbara Andres gave it their best soloistic shots.

But far more on the mark was Maurice Ravel's great Piano Trio in A Minor, showing the composer in that war-torn year of 1914 at the height of his characteristic beauty and power, and violinist Dan Carlson, cellist Amos Yang, and pianist Solon Gordon totally up to the challenge. Here was a music of innovation and voice, wholly the composers own, in agreeable argument, poignant counterpoint, and lyrical grace. The way was clear throughout, and this smallest ensemble actually pulled off the biggest artistic bang of the proceedings.

Of course, the hopeless orchestral enthusiast in me wanted to hear all the players of the concert at once -- imagine an ensemble of flute, clarinet, 2 bassoons, 2 trumpets, 2 trombones, piano, 8 found percussionsts, 3 violins, viola, and 2 celli for a resounding "Farewell!", indeed. Hmm, perhaps a local Composers Orchestra could pick up on that one...
Posted by Mark Alburger at 9:00 PM