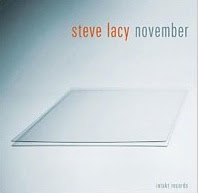 Steve Lacy. November. Intakt. "Steve Lacy plays the soprano saxophone in a little statelier manner than usual in November, a recording from a solo concert performed in Switzerland in November 2003. By the third track you hear a small sound of struggle before some of the notes. The notes themselves, though, are almost physically beautiful, in his usual style: clear, dry and concise, coming in with a tiny shake of vibrato at the end. Sometimes he chooses a spot for a long tone that he makes resonate through the hall, moving the direction of the horn to create a phasing effect, and surrounding it with rests. He is dying. Mr. Lacy had been diagnosed with liver cancer a few months before the concert, and slipped away the following June, at the age of 69. Once you figure out the chronology of his illness, you might think to look up a solo record from when he was well. There are more than 20 of them, but if you choose, say, 'Actuality,' from 1995, you can cross-reference one song, The Door. The earlier example is faster and more vigorous, but in 2003, you’re not necessarily missing that. The later version isn’t sad or embarrassing; he’s not trying and faltering. He’s fully inhabiting the dimensions of the energy he has left, and he still sounds like himself. Starting in 1972 Mr. Lacy developed his solo-saxophone playing into a regular sideline (It had been done before -- by Coleman Hawkins, Eric Dolphy, Sonny Rollins and Anthony Braxton, among others -- but not often). He wasn’t into stamina shows and power-drill arpeggios; playing his own songs, with simple-sounding, singsong melodies, he went into them methodically, investigating modes and intervals and texture, moving through at a saunter. He could pull off a 75-minute solo saxophone performance with reserved and evenhanded grace, as if it were an improviser’s normal activity. There was always a little background pathos or gravity in his music, maybe learned from playing early jazz with older musicians like Pops Foster and Red Allen in his teens, and with Thelonious Monk when Mr. Lacy was 25. But he wasn’t a sentimentalist. Ritually, he pared himself down ('Always leave them wanting more,' Monk advised him). And so he was perhaps ready for a concert like this. This concert -- his last solo performance -- is full of tacit allusions to death, as well as a clear one. Three of its songs -- Tina’s Tune, Blues for Aida, and The Rent -- were originally written in response to friends dying (The record closes with Monk’s Reflections — to which Carmen McRae wrote after-the-fact lyrics about looking back over one’s life). In Tina’s Tune, after playing the melody, he sings the words of the haiku on which he based the tune. They were written by Ozaki Koyo, the Japanese novelist, before his own death: 'If I must die / Let it be autumn / Ere the dew is dry.' Mr. Lacy sings shakily and exhales noisily between each line, either from grief or fatigue. Unusually, for him, he’s showing his cards. Then he gets back to business" [Ben Ratliff, The New York Times, 5/31/10].
Posted by Mark Alburger at 4:00 PM