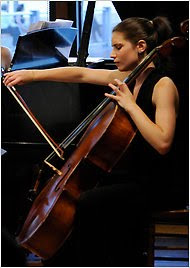 neoLIT Ensemble. Bargmusic, New York, NY. "[T]he full roster includes mezzo-soprano, flute, clarinet, violin, cello and piano, with the musicians playing in whatever combinations their programs demand. [In this program] . . . the group performed without its singer. NeoLIT also has a specialty. All its players are women, and as its program biography puts it, the group is 'especially devoted to the presentation of works by women composers.' But that is evidently not an exclusive mandate. Though the program it originally announced was devoted fully to women, a last-minute change brought Paul Moravec to the lineup and gave over the entire second half of the program to his Tempest Fantasy. Even so, the first half offered music by six composers working in a variety of styles. The opening piece, Alexandra du Bois’s Soleil sur Mer (2007), was commissioned by Bargemusic, and Ms. du Bois paid tribute to the floating concert hall by naming both movements barcarolles, after the gently rocking 19th-century boat song form. Actually, neither movement sounds much like a classic barcarolle, and the two bear little similarity to each other. The first, subtitled 'Brouillard' and meant to evoke fog, is slow, gloomy and not especially memorable. The second, 'L’Été,' is bright-hued and lively, with a birdsonglike theme that stays in the ear. Ellen Taaffe Zwilich’s Divertimento (1983) for flute, clarinet, violin and cello begins and ends with gestures bearing Beethovenian echoes, but within that frame the music is vital and inventive. The second movement in particular, a vigorous Allegro, begins with a rhythmically steady pizzicato figure, shared by the violin and cello; the flute and clarinet briefly weave an inviting line around it. Ms. Zwilich’s work presented an updated, freewheeling look at Neo-Classicism. Barbara S. Buckley’s Quintetta (1953) offered a purer view, its three movements carefully chiseled and beautifully compact. In Dust (2001) Belinda Reynolds used spare, dark-hued cello and clarinet timbres to create a starkly meditative memorial to the victims of the attacks of Sept. 11. Erin Svoboda, the clarinetist, and Aminda Asher, the cellist, gave a beautifully focused, melancholy account of the score. Amelia Lukas, the flutist, played East Wind, Shulamit Ran’s gracefully chromatic 1987 showpiece for solo flute, with a fine balance of virtuosity and poetry. The first part of the program ended with Tania León’s Parajota Delate (1988), a rhythmically zesty vignette in Ms. León’s signature blend of folkish and formal styles. Mr. Moravec’s Tempest Fantasy (2002), the work for which he won the Pulitzer Prize in 2004, is based on the Shakespeare play and uses its central characters -- Ariel, Prospero and Caliban — as the subjects of the first three movements, with 'Sweet Airs' and a Fantasia filling out the set. Mr. Moravec’s writing is always accessible and transparent, and the ensemble responded to its easygoing, picturesque charms with a cheerful, energetic performance [Allan Kozinn, The New York Times, 5/31/10].

Keys to the Future — a festival of solo contemporary piano music organized by the pianist and composer Joseph Rubenstein — 10 pianists highlight a range of styles in works by 19 composers. Le Poisson Rouge, New York, NY. "Jazz was an integral component of the exuberant Five Études in Different Intervals (1992) by Nikolai Kapustin, who once played piano in a big-band jazz orchestra. Stephen Gosling performed the technically intricate and virtuosic work with aplomb. Also jazz-infused was Richard Danielpour’s vivacious Mardi Gras (1992), part of his Enchanted Garden, a set of preludes for piano. Blair McMillen offered a dynamic performance of the work, in which the rapid sequences of jagged rhythmic patterns are punctuated by a momentary lull in the festivities. Mr. Rubenstein performed one of his own scores, the evocative, chromatically meandering Romance No. 2 (aurora) (2007). He opened the program with Bruce Stark’s gentle, introspective Yours (2002), which had a slight New Age sheen to it. A meditative mood also permeated Vuk Kulenovic’s Virginal, (1982), sensitively rendered by Karen Hakobyan. Insistent themes resurfaced throughout the tranquil, arresting work, with delicate, ephemeral motifs repeated with increasing intensity, until a fiery outburst shattered the serenity. A quietly persistent theme restored the calm. Judd Greenstein’s First Ballade (2008), played by Mr. McMillen, began similarly on a serene note before slowly building in intensity. Paying homage to a famous composer or theme is a long-standing tradition, continued by Barbara White in her Mirage (homage to Ravel) (2002), whose gauzy textures evoked the mirage of its title. There was also a Ravelian tint to Philippe Hersant’s pictorial Six Éphémères (2003), given a colorful performance by Mr. McMillen. In “Autumn Wind,” the first movement, trills and rapid, rising figurations in the right hand evoked the wind. “An Ant,” the fourth section, depicted that tiny creature with scurrying sounds and solemn gestures, while the ominous whirlwind of Hurricane concluded the suite with dramatic intensity" [Anne Midgette, The New York Times, 6/1/10]. 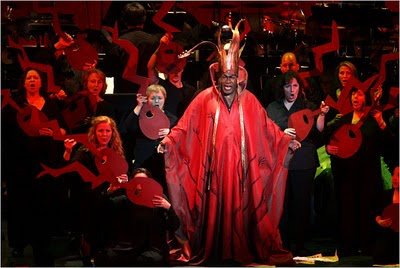 Death of Benjamin Lees (b. Benjamin George Lisniansky, 1/8/24, Harbin, China), at 86. Glen Cove, NY. "[He was] Benjamin Lees, an iconoclastic American composer . . . [whose] work . . . was lyrical, tonal and widely described as approachable . . . . He . . . had recently returned to the New York area after living in Palm Springs, CA, for many years. Known for his versatility, Mr. Lees wrote for symphony orchestra, solo instruments, voice and chamber ensembles. After coming to prominence in the 1950's, he received commissions from major American orchestras; his solo and chamber works were given premieres by distinguished artists like the pianist Gary Graffman, the violinist Ruggiero Ricci and the Budapest and Tokyo String Quartets. At the same time, however, Mr. Lees stood somewhat apart from the marquee names of contemporary music. That stance, to judge from his characteristically candid interviews over the years, suited him just fine. 'I want a composer who communicates,' he told The New York Times in 1982, 'not one who plays cerebral games.' Among Mr. Lees’s best-known compositions are his Symphony No.4 ('Memorial Candles'), for soprano, violin and orchestra, written in 1985 . . . and Symphony No.5 ('Kalmar Nyckel') . . . . His Concerto for String Quartet and Orchestra, composed in 1964, remains one of his most widely performed pieces. In 1960, Mr. Lees’s Symphony No.2 (1958) drew an admiring review from the Times critic Howard Taubman at its New York premiere, performed by the Cleveland Orchestra in Carnegie Hall under George Szell. With the symphony, Mr. Taubman wrote, Mr. Lees 'proclaims himself as a composer of marked individuality.' . . . Above all he disdained serialism, a compositional technique most closely associated with Arnold Schoenberg . . . . 'I tried the technique, but couldn’t do it,' Mr. Lees told The Los Angeles Times in 1992. 'It was like making love to a corpse.' Described most often as conservative or Neo-Classical, Mr. Lees’s style was known for its thoughtful construction (he was a watchmaker’s son), attention to the sonorities of individual instruments, and rhythmic and melodic twists. His champions praised his music for being accessible to the ordinary listener. His detractors criticized it for precisely the same thing. . . . [He was] the son of Jewish parents who had fled pogroms in their native Ukraine. The Lisnianskys came to the United States in 1925, Americanizing their name in the process. They settled first in San Francisco and later in Los Angeles. Benjamin began piano lessons at 5 and started composing as a teenager. After Army service in World War II, he attended the University of Southern California; he later studied privately for several years with the American modernist composer George Antheil. Mr. Lees came to wide public attention in 1954, when his composition Profile for Orchestra was performed by the NBC Symphony on a national radio broadcast. In the 1960's and 70's, Mr. Lees taught composition at the Peabody Conservatory in Baltimore, Queens College, the Manhattan School of Music and the Juilliard School before concluding that teaching was not for him. 'Either you have a talented student, in which case you’re frightened because you don’t want to ruin the talent, or you have someone who has a very nice personality but no talent and should be taking animal husbandry,' he told The Los Angeles Times in 2004. . . . Mr. Lees’s work has been widely recorded. In 2003, he was nominated for a Grammy Award for Kalmar Nyckel. The recording, for Albany Records, was by the Staatsphilharmonie Rheinland-Pfalz, a German orchestra, under Stephen Gunzenhauser. Honored, Mr. Lees attended the awards ceremony in Los Angeles. He did not win. (That year’s Grammy for best classical contemporary composition went to the American composer Dominick Argento for his song cycle Casa Guidi.) Mr. Lees was philosophical. After the ceremony, as he told The San Jose Mercury News in 2004, “' came back, I took out the garbage, and life goes on'" [Margalit Fox, The New York Times, 6/7/10].
Posted by Mark Alburger at 6:00 PM