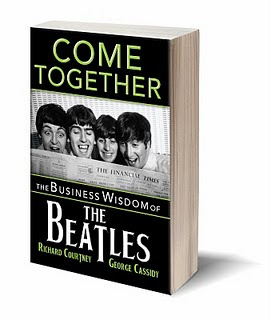 Richard Courtney and George Cassidy. Come Together: The Business Wisdom of The Beatles. Turner. "During a 1968 recording session, they couldn’t find a suitable introduction to Ob-La-Di, Ob-La-Da, a song written by Paul McCartney. John Lennon didn’t much like the song, and, after several hours, he stormed out of the studio. When he returned, he strode to the piano and banged out several chords, then added petulantly, 'Here’s your intro!' 'All eyes shifted to Paul, expecting rejection, perhaps an outburst' . . . Instead, McCartney defused the tension with this: 'That’s quite good, actually.' Lennon’s chords, pounded out in a fit of pique, make up the song’s now-famous opening. 'The underlying disagreement about whether the song had merit in the broader scheme of things did not disappear,' the book concludes, 'but resolving the conflict informed the work and made it stronger, rather than destroying it.' That takeaway -- that disagreement can lead to synthesis -- is just one of 100 lessons that the book teases out of the history of the Fab Four. . . . 'There were some very visible failures, particularly in the late ’60s, centered around the Apple group of companies,' [George Cassidy] says, referring to the various enterprises the Beatles started at the time to enter the film, record and retail businesses. 'For a lot of people that became the whole story as far as the Beatles and business are concerned. Our approach was to take a look at a longer trend line, a bigger set of facts, and say by and large this thing has been ticking upwards for almost 50 years now.' It’s an intriguing idea -- that by studying creative people who are passionate about what they do, we can enhance our own creativity, and business savvy, even if we work in a completely different arena. Of course, it’s easier for most people to relate to musicians and their work than, say, to people who design furniture (and their end tables). . . . [W]hen the Beatles were a young band, their only means of transportation was a van missing its windshield. That meant that in the dead of winter, traveling across England to a gig was such a frigid experience that the band members who weren’t driving huddled on top of one another for warmth, the authors write, adding: 'Take a page out of their book. Although frostbite is generally a bad idea, avoid relying heavily on debt to finance your daily operations or growth.' The Lennon-McCartney decision to always share credit on songs provided another lesson, the authors suggest: Don’t waste time arguing over crumbs when that energy could be better used building a bakery -- or, in this case, the Beatles songbook. Another story from the Beatles’ early years highlights the importance of heeding feedback, even when it’s not what you want to hear. . . . The Beatles could have kept arguing about the . . . merits [of Love Me Do], or simply given up on conquering America. Instead, Mr. Courtney and Mr. Cassidy explain, they kept recording new material and sending it to Capitol -- for one solid year. Finally, in 1964, Capitol released I Want to Hold Your Hand, which became the Beatles’ first No. 1 hit in the United States. 'The most important lesson here is not simple perseverance, though that is important,' the book says. 'The approach was key. They did not continue to pitch Capitol the same product that they had already rejected.' Instead, the Beatles’ producer George Martin got in touch only 'when he had something new and improved.' . . . [The authors] tell a story about how one night Lennon and McCartney taught Mick Jagger and Keith Richards how to write their own songs -- by composing I Wanna Be Your Man in front of them. The anecdote raises the question: Is there a book to be written about the business wisdom of the Rolling Stones? . . . 'The Stones have stayed together as a working band for so long and weathered so many changes in the music business,' he said. 'They weathered the decline of record sales and the increased emphasis on live performance and touring as a revenue source. They also adopted a number of strategies very different from the Beatles -- becoming expatriates to avoid the crushing British tax burden. It’s a very different story but almost an equally fascinating one.' In other words, if Come Together does well, Gimme (Tax) Shelter may not be far behind" [Amy Wallace, The New York Times, 3/19/11].
Posted by Mark Alburger at 4:00 PM