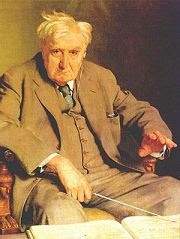 Once upon a time (April 8, 2011) there were three pieces performed by the San Francisco Symphony, conduced by Osmo Vanska -- a great big Ralph Vaughan Williams Symphony No. 2 ("London") (1933), a middle-sized Felix Mendelssohn Violin Concerto (1844), and a little Thomas Larchner Red and Green (2010).

They were performed in a big Davies Symphony Hall in San Francisco.

And in the evening a big audience, including Goldilocks, came to hear the works.

She heard the Larchner. It was a dark, post-minimalist exercise in textures and timbres, featuring relentless repeating notes that stimulated her libido. But it had little thematic content, and it was rather short (because that's often all symphony orchestras will let a contemporary composer get away with, because they have to play all that older music that everyone has really come to hear, anyway), and the people sitting next to her didn't understand it, and probably didn't like it much.

"How eager I am to hear San Francisco Concertmaster Alexander Barantschik!" said Goldilocks, just before the performance of the Mendelssohn. And the soloist performed marvelously on the 1742 Guarnerius del Gesu "David" violin -- evidently the same instrument by which the music was premiered by its namesake Ferdinand David in 1845. But the piece, through no fault of its own (other than its excellence), is now too familiar. And Goldilocks kept looking around for one of those just-right beds in substitute for her just-right chair. But most of the audience loved it, anyway.

Then after the intermission, when Goldilocks was just getting ready to have a nap, up sprung the Vaughan Williams London Symphony. And it was over the top. And just right. The composer, under-rated in some quarters (oh, say by a certain Berkeley professor whose huge study of Western music does not even mention the composer's name), delivers an engaging and varied large-scale, four-movement work, that continues to hold the attention from moment-to-moment in its rational yet emotive unfolding of ideas, and at the same time forms arcs that chill the spine and turn the heart. Conductor and orchestra made the most of every moment, in a shining performance that was left ringing in the ears, even to the daringly, surprisingly quiet conclusion.

And Goldilocks kept awake and was entertained and ennobled, running from the theatre in joy.

What? You were expecting she'd fall asleep and be awakened by the composers? No way, two of the three being dead anyway, but part of the magic of the arts is how the old-and-past can ever be reinterpreted as new and fresh.
Posted by Mark Alburger at 8:00 PM