Dialogues of the Existentialists / Michael McDonagh 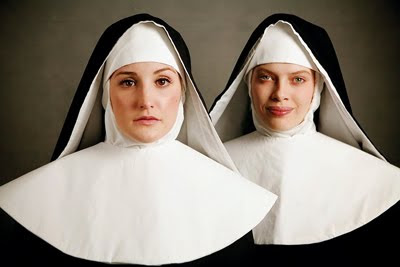 Life is about conflict, and so is opera. And what could be a more dramatic subject than the French Revolution when keeping your head wasn't an abstract issue, but a life and death one. Francis Poulenc's three-act grand opera Dialogues des Carmelites (1953-56) was acclaimed as a masterpiece at its 1957 La Scala premiere, and it's easy to see why. It gets at the heart and soul of its subject through the person of a high strung girl from a rich family, Blanche de la Force, who decides to become a Carmelite nun to escape life, and her internal revolution (or enlightenment) -- from not knowing who she is or what she wants, to full knowledge and decisive action -- is a perfect match for the external one. The inevitable is set in motion.

Why inevitable? Because from the first note to the last the forces of history drive the piece forward, and in Poulenc's very Catholic view God has preordained the outcome. None of this would matter if the music failed to make Georges Bernanos' fine book and its characters come alive, and come alive they do, in an extremely varied yet conversational style not unlike that of the Debussy of Pelleas et Melisande (1893-95, 1901-02). Dialogues is also the biggest installment in Poulenc's series of sacred works -- from the chorus only Litanies a la Vierge Noire (1936), to the chorus with large orchestra Stabat Mater (1950), and Gloria (1959) -- which an expert cast of San Francisco Conservatory Opera Theatre on April 3 at Cowll Theater delivered with power and point.

The role of Blanche, whose mood swings are all over the place (one moment she's impulsive, the next calm, scared to death, childlike, sincere) can't be easy, but soprano Sarah Meltzer, in one of several roles not doubled here, made these aspects fuse: her delivery solid, varied; her technique secure. The role of best friend Sister Constance who's cheerful, but not shallow, was superbly sung by light soprano/soubrette Elise Kennedy -- her clear-as-a-bell tone, diminutive stature and strong stage presence a welcome contrast to Meltzer's and the rest of the cast in this great but largely dark piece.

Its moral center is the convent's Old Prioress Madame de Croissy, whose character embodies the conflict between duty to her nuns, and freedom, which she has never really had. She only has two scenes -- the “entry level interview“ she conducts with Blanche, and the scene of her death. Yet if these don't work you have no opera. But contralto Kristen Choi, who substituted at the last moment for Evgenia Chaverdova, delivered the goods -- resolute, terrified, terrifying, resigned -- her voice in full command.

The rest of the large cast was equally fine, and the Cowell stage , though not large, easily accommodated Peter Crompton's faithful to the period set, which Richard Harrell's direction animated with imagination and grace. Artistic decisions are always complicated, and of course I wondered how Harrell would stage the finale when the nuns go to their death on the scaffold, and his solution made perfect dramatic and emotive sense.

The 43-member Conservatory Orchestra, with a synthesizer sitting in for the piano, gave a vivid, wonderfully nuanced reading of the piece, under conductor Michael Morgan. While each instrumental was choir strong, oboist Elizabeth Nelson's solo arabesque, and Sarah Bonomo's solo, on clarinet were especially striking. Also impressive was the work of timpanist Collin Boltz, and percussionists Jon Lou and Kevin Schlossman, on everything from tenor drum, to chimes, the tempos throughout well judged, though Act 1, Scene 1, could have gone a wee bit faster.
Posted by Mark Alburger at 9:00 PM