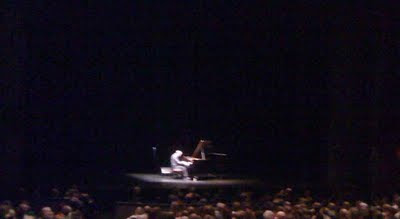 We like to think that concert music is something other than sound we hear with others in a room. Of course it is, but music is a physical fact we encounter first hand and try to wrap our minds around later, and the large and attentive audience at Philip Glass's San Francisco Performances program of his solo piano works seemed to know the difference when they gave him a warm welcome even before he'd played a note at his from memorized 8o-minute intermissionless recital at YBCA's Novellus Theater on April 30. Real affection like that for a composer, especially a controversial and popular one like Glass, is rare, and that's just for starters.

Glass has never been a virtuoso pianist -- he once quipped that he writes the hard keyboard parts for his ensemble's music director Michael Riesman -- but he's a thoroughly engaging and utterly sincere one. He began with Six Etudes – # 1, # 2, # 3, # 6 , # 9, #10 -- from his first book of Ten (1994-99), which are deeply personal, listener friendly yet demanding for the player who has to keep a steady pulse while executing Glass's often rapid and rapidly shifting figures in sometimes irregular metres. His approach here was miles away from his 2002 recording of the set for www.orangemountainmusic.com on a Baldwin grand, which he played here on a Hamburg Steinway Model D, with its typically brilliant, hard Germanic sound. Glass has composed a lot since that CD, and the differences in how he hears now were everywhere apparent. # 1, with its fanfare-like opening which reappears in different contexts, sounded more dramatic, but not as smooth, the driving figures of unequal lengths in # 3, looser, almost improvisatory. But the real news here was how the composer's sudden attacks and releases, and frequent yet tasteful rubato -- ritenuti and diminuendi -- made these pieces in the moment fresh. And his pedalling exploited the massing overtones in a logical but non-systematic way, each sound adding sound to sound like rising floors in a house with interconnecting rooms. The pull backs in tempo in #2 like emotion refracted; the low hammered figures in # 10 like the insistent drone of an Indian harmonium, the ascending melismatic one an integral decoration in a complete structure. Glass's Etudes extend the classical tradition of Chopin and Debussy's sets in an entirely individual way, though unlike Debussy he gives no clues to what they're about.

The other pieces here were just as unique. The 1980 series of alternately lyric/static and active/dramatic variations, Third Series Part IV, which Lucinda Childs renamed and choreographed as Mad Rush -- its opening figuration suggests Schubert's song Du bist die Ruh -- were less exploratory than the Etudes, but very affecting, especially in the soft slow parts. It's as much of a stand alone piece as Glass's 1989 Metamorphosis #1-# 5 series which he made from 2 separate scores -- one for for Errol Morris's documentary The Thin Blue Line, and one for two concurrent Dutch and Brazilian theatre versions by different directors of Kafka's story Metamorphosis (Die Verwandlung) -- we heard #2-#4 -- which encapsulate the isolation of its "hero" Gregor Samsa, who awakens one morning and finds himself turned into a giant cockroach. Its fragile bell-like themes and suspended harmonies, which Glass played with great sensitivity, are a perfect transformation of Samsa's spiritual state into sound, and deeply touching, too.

Dreaming Awake (2006), which Glass wrote and recorded as a limited edition, with a facsimile of his manuscript score, benefit for his Tibetan spiritual teacher Gelek Rinpoche's Ann Arbor, Michigan, retreat center Jewel Heart, is a rapidly changing lyric piece whose warm fluid harmonies draw on the discoveries the composer made in his award-winning score for Stephen Daldry's 2002 film The Hours, which suggest the here and gone feeling of the heart's many facets with consummate grace.

Posted by Mark Alburger at 6:00 PM