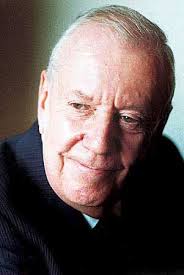 Malcolm Henry Arnold, (b. October 21, 1921, Northampton, UK - September  23,  2006, Norwich) was the youngest of five children from a prosperous family of shoemakers.  After seeing Louis Armstrong play in Bournemouth, he took up the trumpet at 12, and, five years, later won a scholarship to the Royal College of Music.  At the RCM he studied composition with Gordon Jacob and Ernest Hall.  In 1941 he joined the London Philharmonic Orchestra as second trumpet

That same year, he registered as a conscientious objector upon joining the National Fire Service, becoming principal with the LPO two years later.

Also in 1943, Arnold wrote the first of several highly successful concert overtures, Beckus the Dandipratt, and the began his series of concerti with one for horn, in a style acknowledging the influences of Hector Berlioz, Gustav Mahler, Bela Bartok, and jazz.

The next year, after his brother had been killed in the Royal Air Force, Arnold volunteered for military service.  When the army put him in a military band, he shot himself in the foot to get back to civilian life.  Following a season as principal trumpet with the BBC Symphony Orchestra, he returned to the London Philharmonic in 1946, for two years.

Soon after, Arnold wrote a film score, the first for over a hundred for documentaries and features between 1947 and 1969.

His nine symphonies, beginning with No. 1 (Op. 22, 1949), are among his most controversial and significant works, and often deeply personal and serious. It was at this time that Arnold also wrote Clarinet Concerto, Op. 20 (1949), for Benny Goodman.

The 1950's proved an especially prolific period for Arnold, such that by 1951, British critics ranked him with Benjamin Britten as one of the most sought-after composers, connecting his music with that of Jean Sibelius.  Arnold's natural melodic gift earned a reputation as composer of light music in works such as concert overtures, and dance sets.  The latter, including the English Dances (Opp. 27 [1950], and 33 [1951]), are popular both in their original orchestral guise and in later wind- and brass-band arrangements.  These dances are also the basis for Solitaire, choreographed by Kenneth MacMillan.

His first in a sequence of highly-successful collaborations with director David Lean was for 1952's The Sound Barrier.  This was followed the next year by The Captain's Paradise.

1954 saw the composition of his Harmonica Concerto, Op. 46, as well as the films Hobson's Choice You Know What Sailors Are, and The Belles of St Trinian's (a favorite score that was to be the first of a series through 1980).  After Trapeze (1956), his score for Lean's epic Bridge on the River Kwai, won an Academy Award in its year of composition -- 1957.  Cinematic effort in the following season included The Roots of Heaven and The Inn of the Sixth Happiness (1958), the latter winning an Ivor Novello Award.

His set of Scottish Dances, Op. 59, appeared in 1959, as did his Guitar Concerto, Op. 67, for Julian Bream. Other cinematic successesof this period included No Love for Johnnie (1960) and Whistle Down the Wind (1961).

By this time, Arnold had a reputation for being unpleasant, frequently drunk, and highly promiscuous --  divorcing his wife in that year.  His second wife was forced to take out a court order upon separation, and, after this divorce, he made two suicide attempts.

Following 1962's Cornish Dances, Op. 91, and two more film scores (The Inspector and The Lion) -- his three-hands-on-two-pianos concerto, for the husband-and-wife team of Cyril Smith and Phyllis Sellick, was enthusiastically premiered at the 1969 Proms.  This was also the year of Arnold's last major film score, David Copperfield.

In 1978, he was treated as an in-patient for several months in the acute psychiatric ward at the Royal Free Hospital, London, and the next year entered St Andrew's Hospital in Northampton to be treated for depression and alcoholism.

Arnold overcame both, despite being given only a year to live in the early 1980's, lived more than 20 more years thereafter, completing his final symphony in 1986, the same year as the Irish Dances (Op. 126), which were soon followd in 1988 by Cello Concerto, Op. 136, for Julian Lloyd Webber, and a Welsh (Op. 138, 1988) dance set.   By the time of his 70th birthday in 1991, Arnold's reputation recovered and he was able to appear at Royal Albert Hall to receive an ovation after a Proms performance of his Guitar Concerto.

Malcolm Arnold died at the Norfolk and Norwich University Hospital, Norwich, on September 23,  2006, after suffering from a chest infection.  His last work, The Three Musketeers, a pastiche assembled by John Longstaff and Anthony Meredith, was premiered that same day by the Northern Ballet, at the Alhambra Theatre in Bradford.

A secondary school in Northampton, was renamed the Malcolm Arnold Academy after the composer on September 3, 2010.