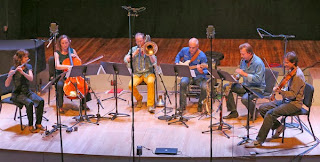 Dedalus Ensemble presents Made in USA.  Roulette, New York, NY.  "This polished, proficient Montpellier ensemble -- represented here by a sextet of Amélie Berson, flutist; Cyprien Busolini, violist; Pierre Stéphane Meugé, saxophonist; Deborah Walker, cellist; Thierry Madiot, trombonist; Didier Aschour, guitarist -- came together in 1996. Modern American music is one of its specialties, Mr. Aschour said from the stage between pieces. . . . "40˚ 44’ 5.82” N, 74˚ 1’ 38.53” W, by Devin Maxwell, was an amiably strident greeting, with chords and clusters hammered insistently, then lightly, in ragged unison (Running the title through Google Maps renders a street address in Manila, although the coordinates are actually those of a site in Hoboken, N.J).  A similar rhythmic vitality applied in Jonathan Marmor’s brightly pointillist Penguin Atlas of African History and Michael Vincent Waller’s sweetly lyrical Ritratto.  Quentin Tolimieri’s Any Number of Instruments dispatched Mr. Madiot to the balcony, his melancholy lines wafting out above moody chords floating up from the stage.  Coney Island, April 15, 2012, by Craig Shepard, ended the concert’s first half with dreamlike melancholy, punctuated with the metal tingle of triangles suspended from each player’s music stand.  Most of the works on the concert’s second half dealt in tonal ambiguity and intense, tactile timbres. For the first of Jason Brogan’s Deux Études, the musicians took places among audience members on the floor.  As they played near the threshold of audibility, your listening grew sharp and broad, folding the room’s ambience and outdoor street sounds into the piece.  The second étude, played later in the set, offered a concentrated perspective of similar gestures, with the players onstage.  Both Catherine Lamb’s Overlays Transparent/Opaque and John Hastings’s Theory of Harmony employed similar extremes of silence, space and detail.  In these pieces, placid discords conjured eerie overtones, wobbling beats and the sounds of instruments not present; Mr. Hastings added electronic static, his sounds rising above, then receding below, a wash of white noise.  Setting instruments aside, the Dedalus players ended with The Young Generation Is Right, by Travis Just, clapping their hands in steady patterns in alternation with electronic tones from a laptop computer.  After all the meditative intensity that preceded it, Mr. Just’s piece provided a welcome note of playful quirk" [Steve Smith, The New York Times, 9/10/13].

Teng Ensemble presents Eight.  Esplanade Recital Studio, Singapore.  "The all-Singaporean Teng Ensemble, now in their eighth year, also has eight members, conveniently giving their concert its title. All its members are music teachers and they have just recorded their first album. They include a countertenor and performers on the yangqin, pipa, sheng, guzheng, cello, erhu and guitar.  As composer-in-residence Benjamin Lim Yi took pains to explain repeatedly throughout the concert, this was not a classical Chinese music concert -- the ensemble decided early on in their existence that they did not want to pigeon-hole themselves in their repertoire, opting instead to bring as large an audience to Chinese music as possible.  In an effort to portray an image different from that usually associated with classical Chinese musicians, the ensemble has carved itself a niche in Singapore’s often bland music scene, and their chosen uniform -- a snazzy black suit, skinny tie ensemble speaks to such aspirations. . . .  A sea of white chrysanthemums took centre-stage, forming an attractive foreground between the audience and the musicians, and also a canvas on which mood lighting – very well executed, by the way – was projected. Eight new pieces / arrangements by Benjamin Lim Yi . . . were given their first performance.  Despite his varied experience in film scoring, with at least five film scores to his name, including the complex score . . . to Loo Zihan’s controversial Threshold, these pieces seemed often cut from the same cloth, with atmospheric, dreamy mood music . . . interspersed with pentatonic melodies on electronica.  Many of the tunes had a pre-recorded synthesized track -- the purely acoustic arrangement of  The Moon at Mt Guan  (lovely, but too short an excerpt) was an exception; Un die in Settembre was another.  Lim’s ability to create complex musical scores was not much in evidence here, many pieces were quite easy to listen to but not the most memorable, with what might best be described as chinoiserie with a bass-line, what might result if Kitaro (those drum beats in Forest Trail, mainly) got together with Yanni and Joe Hisaishi to write the soundtrack to a Chinese film score. . . . The most successful pieces were the mellow Un Die in Settembre, inspired by Hisaishi. and Valse, which Lim explained was influenced by their common love of Korean drama" [Derek Lim, The Flying Inkpot, 9/29/13]. 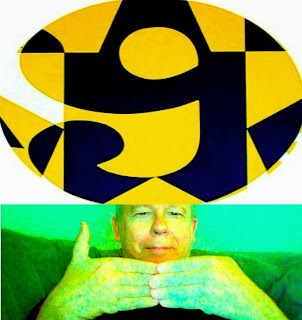 Dmitri Shostakovich's The Nose.  Metropolitan Opera, New York, NY.  Through October 26.  "William Kentridge’s . . . staging of Shostakovich’s first opera, The Nose . . . with unflagging energy and unfettered imagination . . . powerfully seconds both the irreverent zaniness of the Gogol story . . . and the teeming exuberance of Shostakovich’s music.  Gogol’s tale, from 1836, is a sendup of self-important petty bureaucrats. His antihero, Kovalyov, a collegiate assessor who likes to be called Major, wakes up one morning to find his nose gone: possibly the victim of a razor slip by Kovalyov’s tippling barber, Yakovlevich, though the circumstances are, in Gogol’s words, 'enshrouded in mist.' The Nose, meanwhile, has swelled to human scale and taken on a life of its own, complete with a career as state councilor, a bureaucratic rank higher than Kovalyov’s. Understandably confounded and momentarily humbled, Kovalyov spends the work in pursuit of the Nose, which he ultimately succeeds in having put back in its place, literally and figuratively.  Shostakovich, who was 20 when he began the opera in 1927, responded with a peacock display of his prodigious gifts, a richly inventive score that in retrospect seems to have accurately predicted many of the directions of his work to come. The highly original special effects include an extended interlude for percussion alone and a song by Kovalyov’s servant, Ivan, accompanied by balalaikas. . . .  The setting, though never terribly specific, is clearly meant to represent the Russia in which Shostakovich was working, the nascent Stalinist era, with red flags and banners flying, and Stalin himself the subject of some of those sketches. It was surely a time as rich in petty bureaucrats as Gogol’s Russia a century before, and so the satire seems as pertinent in that sense as it is impertinent in mood. . . .  The Nose, generally just a visual presence, has one big number, lording it over Kovalyov in the cathedral, which Alexander Lewis, a tenor, effectively dispatched here. . . . [Valery] Gergiev is a master of this score, and the Met Orchestra responded eagerly to his ministrations, reveling in the young Shostakovich’s brash strokes" [James R. Oestreich, The New York Times, 10/1/13].
Posted by Mark Alburger at 7:00 PM