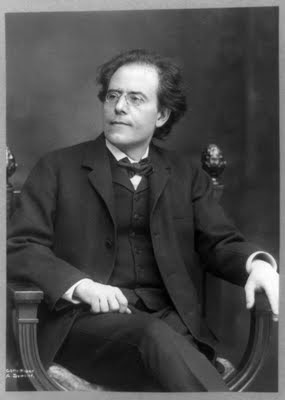 Whatever. Life is unpredictable.

Maybe that's why Gustav Mahler's symphonies hold up so well after a hundred years or so.

While the language is comprehensible (progressive yet intelligible), the narrative often is not.

Mahler often simply doesn't take us where we expect to go. There are bumps and turns, starts and stops, cliffhangers and ennui. Just like life.

And master Mahler interpreter Michael Tilson Thomas and the San Francisco Symphony captured that unpredictability (if unpredictability can ever be captured) with a blazing reading of the Symphony No. 5 in C# minor (1902) on September 30 at Davies Hall. Not that this was a perfect performance -- who could predict that? The signature brass writing had a few ink stains and there were questions of balance -- but the spirit was there in an organic work that grows from Mahler's previous writing, transforms in our hearing, and portents towards times ahead.

The five-movement work pairs initial and concluding movements around a rambling, rambunctious, ramshackle scherzo, where solo French horn shines in a way later recaptured in Dmitri Shostakovich's work. The opening two movements remain among the most compellingly passionate, solemn, and spiritual outpourings in the literature -- always an arresting and stimulating encounter. That the penultimate Adagietto has been perceived as the most "popular" section remains a mystery (a casual cross-section of listeners uniformly weighed in with comments favoring the aforementioned), but the music ends up in a happy place (for Mahler, at least, and uncharacteristically so) with a hearty and rousing finale that refuses to take itself too seriously.

Yet after all this, the great Austrian makes for difficult programming. Several of the symphonies are really too long for a half a program and not quite lengthy enough for an evening's entertainment. The solution here was to balance it with a couple of miniatures in a miniature pre-intermission set, consisting of Carl Ruggles's Angels (1920) and Morton Feldman's I Met Heine on the Rue Furstenberg (1971), respectively for brass and a Pierrot-ensemble enriched by percussion and the talents of soprano Elza van den Heever.

These had all the makings of a San Francisco Contemporary Players concert -- but here as chamber music somewhat lost on the big stage and representing everything that the Mahler was not: small rather than large, short / long, pure / heterogeneous, subtle / overt, featuring a predominance of stasis over change.

This is all relative, of course; and is not to simplistically imply that there is no subtlety in Mahler and no change in Feldman. As Arnold Schoenberg said of Anton Webern, that there can be a world in a sigh, so do the fine points of Feldman stand out as marked departures from previously established norms.

Both Ruggles and Feldman have a groove. In a way. you know where they are going, because they are already there. From a certain perspective, very Transcendental or Zen. Morty acknowledged once that, after he had chosen instruments for a work, the piece was in some sense already finished, and this seems again to be the case here. The instruments skate over an atonal-minimalist tissue of breaths and fits, the shreds of both classicism and romanticism. Meanwhile Ruggles takes his solemn muted brass over a dignified mildly dissonant chorale of cushiony sustains.

What few instrumentalists were on the stage in the first half were there for the set. First the brass played, and then the flute, clarinet, violin, cello, piano, percussion, and vocal music. But I wanted to hear both works simultaneously, as a yet-unimagined intermingling of sonic densities.