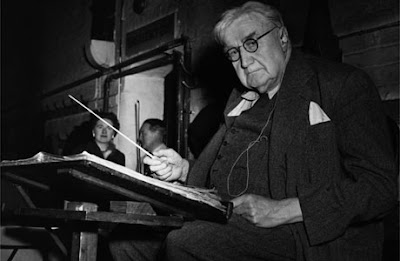 Sometimes the music is so good, you feel like you are right "in the action," and that was the case when Peter Oundjian took the stage to conduct the San Francisco Symphony in Maurice Ravel's Alborada del Gracioso on October 19 at Davies Hall. The visceral excitement made one want to change careers and become a orchestra member for life.

Then again, maybe it was just the good seats -- five rows back, mid-center -- but it seemed more than this, a feeling confirmed by the powerful performance of Ralph Vaughan Williams's wartime Symphony No. 6 (1947) that concluded. Oundjian made an excellent case from the podium that, despite the composer's thou-doth-protest-too-much, the work was indeed born out of world conflict (from a 75-year-old composer whose work, like certain individuals, became "crankier" with age). To make his point, the conductor prefaced the performance with the earlier Vaughan Williams setting of Greensleeves, before launching into the symphony's first movement, which shatters all bourgeois pretence. Wow! Angry chromatic lines and rushing scales set the mood for an exercise which, while not as complex as the corresponding music in the fourth symphony, is every bit as animated, with just enough thematic development and repetition to, as the composer put it, "show that this is a Symphony, not a symphonic poem."

But it is a kind of poem -- a sonic Howl (Allen Ginsberg's work was nine years later, in related yet decidedly different socio-political circumstances) -- and the second movement rachets down and up in ominous triplet figures. The bombs drop in the scherzo, but unlike the nukes across the street at War [!] Memorial with John Adams's Dr. Atomic, these were "conventional" weaponsofmassdestruction delivered during the firestorm of London. There is even an homage to a jazz saxophonist killed in a collapsed nightclub, in the animated trio section, survived by the woodwinds at large.

The conclusion, right down to the eerie alternations of Eb major and E minor chords (they share a G, so some players hold that note, while others queasily meander back and forth between the above half-steps -- we don't know whether to be hopeful or devastated -- and devastated pretty much wins), came off as well related in Vaughan Williams's comments recorded on an old Adrian Boult album where "indeed, in some places your playing was so clear that all of my faults came to the surface -- I hope a few virtues as well. ... [It was a] wonderful performance of the Finale Epilogue . . . . It was a wonderful feat of endurance to play an absolute pianissimo . . . on end. And mind you, it was not of merely not playing loud. It was a positive, sensitive pianissimo, full of meaning and tension."

"And when I say 'gentlemen,' I include the lady harpist."

And some things, mercifully, change.

Endurance and change came to mind in the interior action-packed George Gershwin Piano Concerto in F that was energetically performed by the animated Jean-Yves Thibaudet, who stomped his way through in fully memorized form. It was a testament to the high quality of this concert that this music somehow became the "slow movement," bookended by the equally demonstrative readings of Ravel and Vaughan Williams. The action simply never stopped.
Posted by Mark Alburger at 9:00 PM