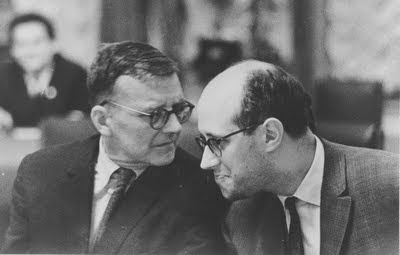 For the first time in my 14-odd years of reviewing the San Francisco Symphony, I was unable to cover the opening night gala, due to my own obligation to rehearse the San Francisco Composers Chamber Orchestra Gala (which occurs Friday, September 16, incidentally, at Old First Church on Van Ness Avenue, and features my outrageous setting of the Book of Ecclesiastes -- how's that for a shameless self-promotional plug?...). So the next best thing (and it was a poor second, let me tell you , devoid of champagne and fancy dresses, with not even a cup of coffee and cookie in sight) was to attend the SFS gala dress rehearsal on the morning of September 9. But we go to the symphony for the music, right?

Gone are the years of Michael Tilson Thomas premiering a new work -- local or otherwise -- as a curtain raiser, but not my kvetching about the lack thereof. Instead, we had a glittering rendition of Nicolai Rimsky-Korsakov's Capriccio Espagnol on this all-Russian program.
The main bill of fare was Dmitri Shostakovich's sardonic Cello Concerto No. 1, with the not-so-sardonic Yo-Yo Ma. Talk about playing against type. But Ma's consummate professionalism brings his ever-present musicality and energy to this terse work in such a way that one can really experience the Soviet angst. Not exactly your typical opening night bon-bon, but this work is a crowd-pleaser nonetheless, allowing woodwinds, horns, timpani, and strings to shine along with the soloist.

Throughout the rehearsal one was struck by the business-like atmosphere. While there were a few stops for attention to nuances (indeed Ma returned after the break just to perfect a few snippets), much of the time was given to partial or complete run-throughs, in music that has undoubtedly been performed by most of the individuals on many occasions. Hardly sleepwalking or autopilot, but again the focus was on the musics, not the theatrics, with Thomas rarely rising from the comfort of his rehearsal chair.

There was some new old music, however (that is, a bit of repertory never before played by this ensemble), that being Peter Tchaikovsky's own string orchestra setting of music from his String Quartet No. 1, here retitled Andante Cantabile in B Major for Cello and Orchestra. This lovely, languorous composition seemed to capture the heart and soul of Ma and the strings, and was a delight to experience.

Also a delight was Thomas's stern and fiery reading of the same composer's March Slav, which features a grim modal-gypsy melody worthy of Mussorgsky, Mahler, or Shostakovich; Tchaikovsky's old-standby usage of a Russian national anthem; and general fireworks aplenty. A couple of late additions from his Swan Lake rounded out the program, and found Ma and concertmaster Alexander Barantschik in sonorous interplay.

This was a stimulating rehearsal that almost made up for missing the opening Gala that evening. And almost made up for the parking ticket I received for not remembering that there's nothing like the magic of the night, whether it be due to the chic party atmosphere or the fact that the police have more difficulty noticing that your automobiles wheels are turned the wrong way....
Posted by Mark Alburger at 9:30 PM